Time to say enough is enough: UK PM May on London terror attacks

Theresa May said the series of attacks represented a perversion of Islam and Britain's counter-terrorism strategy needed to be reviewed. 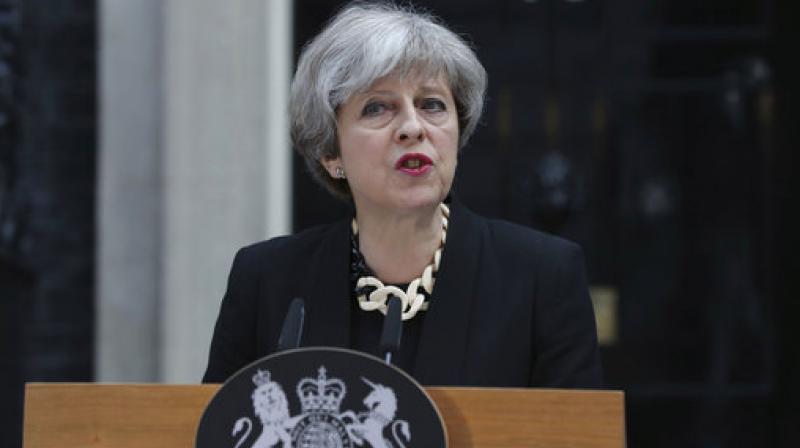 Though national campaigning was suspended on Sunday, British PM May said it would be resumed on Monday and elections would go on as planned. (Photo: AP)

London: Three attackers drove a van into pedestrians on London Bridge before stabbing revelers nearby on Saturday night, killing at least seven people in what Britain said was the work of Islamist terrorists engaged in a ‘new trend’ of terrorism.

At least 48 people were injured in the attack, the third to hit Britain in less than three months and occurring days ahead of a snap parliamentary election on Thursday.

Police shot dead the three male assailants in the Borough Market area near the bridge within eight minutes of receiving the first emergency call shortly after 10 pm local time.

"We believe we are experiencing a new trend in the threat we face as terrorism breeds terrorism," Prime Minister Theresa May said in a televised statement on Sunday in front of her Downing Street office, where flags flew at half-mast.

"Perpetrators are inspired to attack not only on the basis of carefully constructed plots ... and not even as lone attackers radicalised online, but by copying one another and often using the crudest of means of attack."

She said the series of attacks represented a perversion of Islam and that Britain's counter-terrorism strategy needed to be reviewed, adding: "It is time to say enough is enough."

Most of the main political parties suspended national campaigning on Sunday, but May said campaigning would resume on Monday and that the election would go ahead as planned.

London Bridge is a major transport hub and nearby Borough Market is a fashionable warren of alleyways packed with bars and restaurants that is always bustling on a Saturday night.

The area remained cordoned off and patrolled by armed police and counter-terrorism officers on Sunday, with train stations closed. Forensic investigators could be seen working on the bridge, where buses and taxis stood abandoned.
There was no immediate claim of responsibility for the latest attack to hit Britain and Europe.

Less than two weeks ago, an Islamist suicide bomber killed 22 people including children at a concert by US singer Ariana Grande in Manchester in northern England. In March, in an attack similar to Saturday's, a man killed five people after driving into pedestrians on Westminster Bridge in central London.

Grande and other acts were due to give a benefit concert at Manchester's Old Trafford cricket ground on Sunday evening to raise funds for victims of the concert bombing and their families. Police said the event would go ahead as planned, but security would be increased.

The three attackers on Saturday night were wearing what looked like explosive vests that were later found to have been fake. May said the assailants' aim had been to sow panic. The BBC showed a photograph of two possible attackers shot by police, one of whom had canisters strapped to his body.

Home Secretary (interior minister) Amber Rudd said it did not appear that there was a link between the attackers and the Manchester bombing.

Islamist terrorists have carried out attacks in Berlin, Nice, Brussels and Paris over the past two years.

The London Ambulance Service said 48 people had been taken to five hospitals across the capital and a number of others had been treated at the scene for minor injuries.

London Mayor Sadiq Khan said some of those who had been injured were in a critical condition. He said the official threat level in Britain remained at severe, meaning a terrorist attack is highly likely. It had been raised to critical after the Manchester attack, then lowered again days later.

"One of the things we can do is show that we aren't going to be cowed is by voting on Thursday and making sure that we understand the importance of our democracy, our civil liberties and our human rights," Khan said.

Roy Smith, a police officer who was at the scene during the unfolding emergency, expressed his shock on Twitter.

Witnesses described a white van careering into pedestrians on the bridge.
"It looked like he was aiming for groups of people," Mark Roberts, 53, a management consultant, said. He saw at least six people on the ground after the van veered on and off the pavement. "It was horrendous," he said.

A taxi driver told the BBC that three men got out of the van with long knives and "went randomly along Borough High Street stabbing people." Witnesses described people running into a bar to seek shelter.

"People started running and screaming, and the van crashed into the railing behind. We went towards Borough Market and everyone went inside (the bar)," one witness, who gave his name as Brian, 32, said.

Another witness, who declined to be named, described a scene of panic in the bar.

"They hit the emergency alarm. There was a line of people going down to the emergency exit. And then people started screaming coming back up," said the 31-year-old, his white top covered in blood.

"Around the corner there was a guy with a stab wound on his neck ... There was a doctor in the pub and she helped him. They put pressure on the stab wound."

BBC radio said witnesses saw people throwing tables and chairs at the attackers to protect themselves.

ISIS, losing territory in Syria and Iraq to an advance backed by a US-led coalition, had sent out a call on instant messaging service Telegram early on Saturday urging its followers to launch attacks with trucks, knives and guns against ‘Crusaders’ during the Muslim holy month of Ramadan.

British Prime Minister May was due to chair a meeting of the government's Cobra security committee later on Sunday.

US President Donald Trump took to Twitter to offer help to Britain while Russian President Vladimir Putin expressed condolences in a telegram to May.

"Today, we are united across all borders in horror and sadness, but equally in determination. I stress for Germany: in the fight against all forms of terrorism, we stand firmly and decisively at the side of Great Britain," she said.

French President Emmanuel Macron said on Twitter that "France is standing more than ever side by side with the UK".

Four French nationals were among those injured in the London attack, French officials said. Australia said two of its citizens were caught up in it and one of them was in hospital.

The Manchester bombing on May 22 was the deadliest attack in Britain since July 2005, when four British Muslim suicide bombers killed 52 people in coordinated assaults on London's transport network.