Giuseppe Conte is seeking a firm mandate to continue dialogue with EU over Italy's public debt. 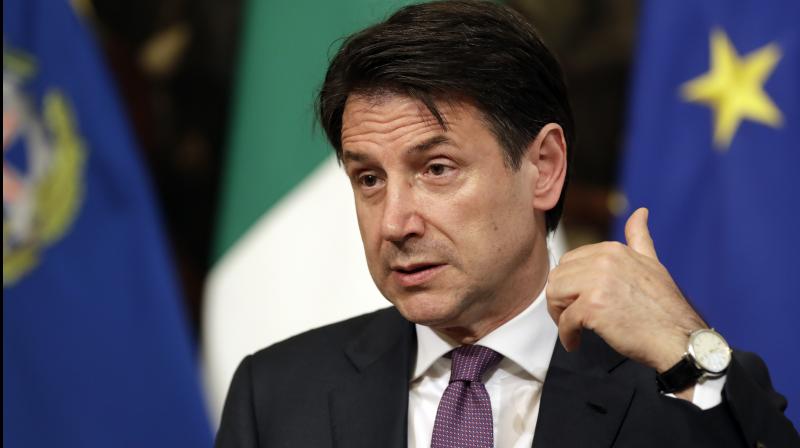 ‘I want a clear, unequivocal and speedy response,’ Giuseppe Conte said, calling for a ‘loyal collaboration’ from all ministers. (Photo: AP)

Rome: Italian Prime Minister Giuseppe Conte said on Monday he was ready to resign unless the two parties in the governing populist coalition -- the League and the Five Star Movement -- stopped squabbling.

"I am asking both these political forces to make a choice and tell me if they still want to honour the government's obligations," he said. If not, "I will simply end my mandate." Relations between the League and M5S soured during the campaign for European parliamentary elections on May 26.

"I want a clear, unequivocal and speedy response," Conte said, calling for a "loyal collaboration" from all ministers.

Conte is seeking a firm mandate to continue a dialogue with the European Union over Italy's public debt.

Italy's far-right Deputy Prime Minister Matteo Salvini, who is from the League, said last Tuesday that he expected Brussels to sanction his country for its deteriorating deficit and huge debt by imposing a fine of three billion euros ($3.3 billion).

The League and the M5S have sparred over a host of issues and strongman Salvini, deputy prime minister and some already accuse the anti-immigration interior minister of acting as if he were head of government.

Salvini has also put out a host of controversial tweets.

"At a time when youth unemployment is reaching 50 percent in some regions... someone in Brussels is asking us, under past rules, for a fine of three billion euros," he told RTL radio recently.

Conte said Monday: "If there are political questions to be resolved, one does not send ambiguous signals through the press and use witticisms on social media.

"We have been tasked with designing the future of the country which is different from playing to the gallery and collecting 'likes' on social media," he said.

Salvini did not even wait for the end of Conte's press conference to declare: "We are ready, we want to go ahead and we can't lose time, the League is ready." But he also evoked the League's historic performance in the European Union elections, as well as its moves to tighten security, stop immigration and put an end to the politics of austerity.

Five Star's Luigi Di Maio also responded on Facebook, saying: "We are loyal, we want to get to work immediately... Let's forge ahead with loyalty and coherence, we still have to change a lot of things." The populist-far right coalition in Italy was already in conflict with Brussels late last year over Rome's big-spending 2019 budget, which the commission rejected in a historic first.

Both sides finally softened their positions to reach a compromise, but in the commission's latest economic forecasts, published in early May, Italy was the worst economic performer in the eurozone, with zero growth well below other countries and debt at a record level.