The vote for president completes the roster of the EU's five most important jobs. 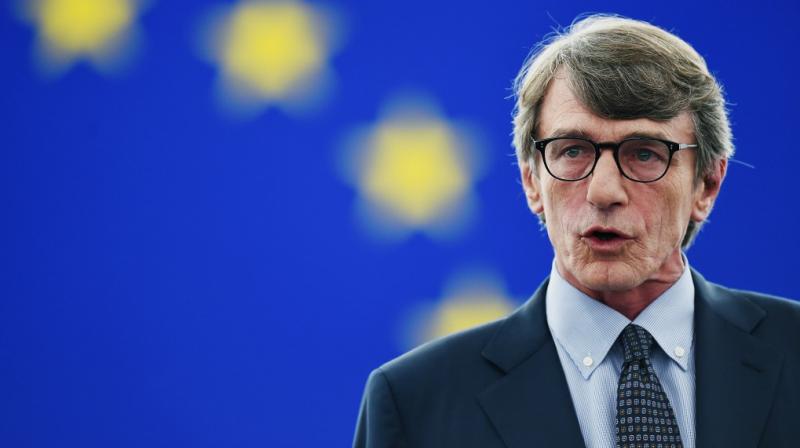 Strasbourg: The European Parliament on Wednesday elected an Italian social democrat as its new president, filling the final top EU job a day after Brussels named two women to key posts for the first time.

The new MEPs elected in May's European polls took office on Tuesday during a brief inaugural session before voting by secret ballot to choose Sassoli as successor to Antonio Tajani, a conservative from Italy.

The 751-seat parliament — based in Strasbourg, France — is more fragmented than ever after the May election saw solid gains by the liberals and Greens as well as the far right and eurosceptics.

The vote for president completes the roster of the EU's five most important jobs, with the others settled on Tuesday at the end of three days of negotiation among the EU's 28 national leaders in Brussels.

Sassoli's election to a two-and-a-half year term as parliament president — effectively the speaker of the chamber — is a sought-after post by the major European political families, though less coveted than that of president of the European Commission or European Central Bank.

The national leaders also suggested that the chamber's presidency should be shared for the next five years by the Socialists and Tajani's centre-right EPP. Sassoli's election completes the first part of this, but it remains unclear whether he will make way in due course.

Von der Leyen is expected to visit parliament in the afternoon to court MEPs, whose approval is needed to confirm her position as commission chief.

Germany's Manfred Weber, head of the EPP group, took note of the outcome of the Brussels summit by renouncing a run for parliament head, after having already thrown in the towel in the race for the Commission's presidency.

"It is normal, that after two and a half years of an EPP president, now it is up to the Socialists to present a candidate," Weber told a press briefing in Strasbourg.

"We are ready to check with the Socialists for a candidate and to give our support," he said.

But the Social Democratic group in the European Parliament, second only to the EPP in terms of seats, put forward Sassoli after criticising the agreements reached between the 28, which it described as "deeply disappointing".

They had wanted the commission head spot to go to their leading candidate, the Dutchman Frans Timmermans.

On Tuesday, the opening of the Parliament's session was marked by the return of Nigel Farage, a veteran of the EU chamber since 1999, whose Brexit Party MEPs turned their backs when asked to stand for the EU anthem -- Beethoven's Ode to Joy -- at the start of the session.

As Brexit has still not taken place, there are again 73 British MEPs, who will be able to sit temporarily until the divorce goes through. The new deadline is October 31.

It also saw the demonstration of some 10,000 Catalans who came to Strasbourg to support three secessionists elected at the end of May but prevented from sitting by Spanish authorities.