One Twitter user posted a graph showing the government's slipping majority since 2017. 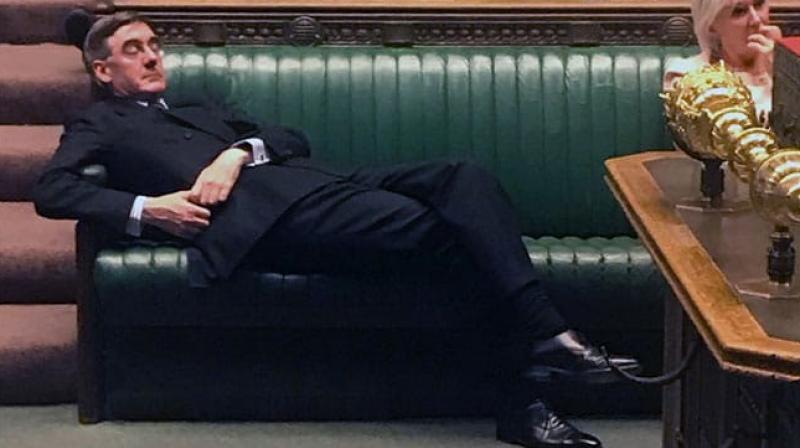 With his tiny round glasses pointing at the ceiling and wearing a double-breasted suit, Rees-Mogg appeared to be taking a rest in the crucial final minutes before a crunch Brexit vote on Tuesday night lit up Twitter. (Photo: AFP)

London: The sight of hardline Brexit backer Jacob Rees-Mogg stretching out across the front bench of Britain's parliament during a particularly heated debate has become an instant meme, causing anger among government opponents.

With his tiny round glasses pointing at the ceiling and wearing a double-breasted suit, Rees-Mogg appeared to be taking a rest in the crucial final minutes before a crunch Brexit vote on Tuesday night lit up Twitter.

It came after Prime Minister Boris Johnson's government had lost its working majority in parliament and was about to be dealt its first painful defeat over the terms on which Britain should leave the European Union.

One Twitter user posted a graph showing the government's slipping majority since 2017.

It traced the contour's of the aristocratically dressed Rees-Mogg -- starting in the upper-left corner near his neatly combed hair and ending near his shiny shoes in the bottom right corner.

Rees-Mogg's behaviour in a chamber that has cherished stuffy traditions for centuries sparked particular outrage because he is the government's formal representative in the lower House of Commons.

"The Leader of the House has been spread across around three seats, lying out as if it was something very boring for him to listen to tonight," she fumed in another clip that went viral.

"When he has been lecturing us about democracy -- we will have none of it!"

Jacob Rees-Mogg raised his eyebrows and shook his head in what appeared to be an expression of disbelief at Lucas's attack.

But he did not sit up.

"**BREAKING NEWS** @Jacob_Rees_Mogg crushed under the weight of his own self-importance," one user wrote.

"Man, peeps are so mean to JRM, he's only sitting like this because he has no backbone whatsoever," another quipped.