The race attracts the young and old, the athletic and the portly. 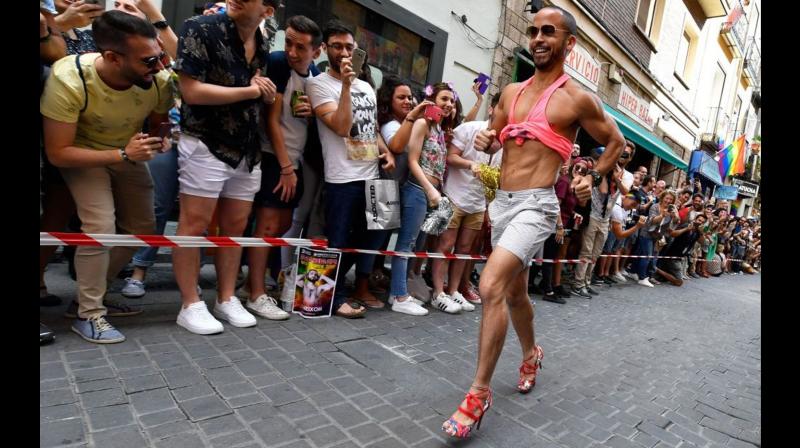 The rules state that heels must be at least 10 cm (4 inches) high, and the shoes are measured before the race. (Photo: AFP)

Madrid: Dozens of men and few women in stiletto heels raced through the centre of the Spanish capital on Thursday, defying gravity, the heat and attempts by the far-right party Vox to curtail their Gay Pride celebrations this year.

The race in Chueca, a gay-friendly neighbourhood in central Madrid, draws competitors from abroad and is one of the most eagerly awaited parts of the annual festival of the lesbian, gay, bisexual and transgender (LGBT) community.

The race attracts the young and old, the athletic and the portly. Reaching the finish line is no easy task: rules state that heels must be at least 10 cm (4 inches) high, and the shoes are measured before the race.

Madrid Pride, one of the world's largest LGBT celebrations, will culminate in a parade in the city centre on Saturday.

Contestants take part in the annual race in high heels during Gay Pride celebrations in the quarter of Chueca in Madrid.

The ultra-conservative Vox, a political newcomer who won about 10 per cent of the vote in April's national election, recently enabled the centre-right to take over the Madrid city hall and has increasingly attacked the festival and LGBT rights in Spain.

Vox wants to move the Pride Parade from the city centre to a park in the suburbs.

"When a mother, a father step outside there is no reason for them to stumble into this spectacle ... involving explicit sexual acts in the street at daytime".

During the high heels run, there were chants against Vox.

Javier Garcia, a 23-year-old nurse, wants the race to stay in Madrid's centre to keep it visible.

"People still have to fight and make visible certain inequalities that are still not fully resolved," he said before taking part in the race.

Garcia said he felt nervous because it was his first time running in Madrid's event, although he had participated in a similar one in the Canary Islands.