Agile, short-range interceptors, Spitfires were crucial in 1940 Battle of Britain as UK fought off threat of an invasion by Nazi Germany. 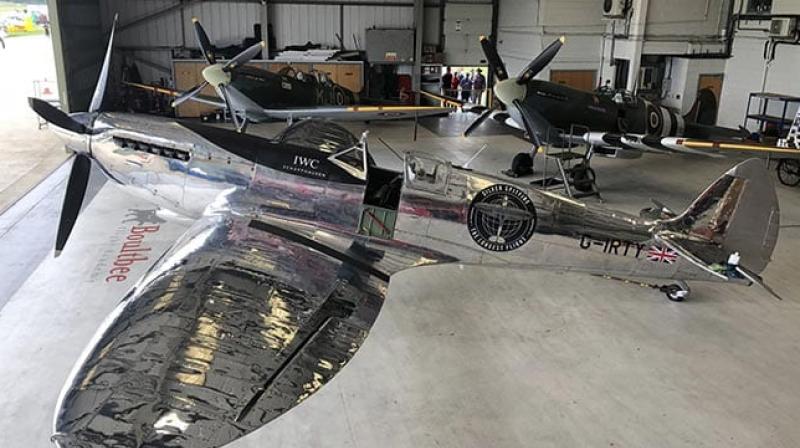 The restored plane fought in World War II but has been de-militarised, stripped of its guns and paintwork to reveal the shining, silvery metal underneath. (Photo: Twitter/ LongestFlight)

Chichester: Two British aviators take off Monday on a first-ever attempt to fly a Spitfire around the world, proclaiming the iconic fighter plane as a symbol of freedom.

The restored plane fought in World War II but has been de-militarised, stripped of its guns and paintwork to reveal the shining, silvery metal underneath.

"It's the most majestic machine," pilot Steve Brooks told AFP.

"We're hoping to reacquaint people with the beauty and the aesthetic of the Spitfire."

The 76-year-old plane is due to take off from Goodwood Aerodrome in England for a four-month, 43,500-kilometre (27,000-mile) adventure westwards around the globe.

Taking turns, Brooks, 58, and Matt Jones, 45, who run a flight academy, will pilot the Silver Spitfire to around 30 countries and soar over some of the world's most cherished landmarks.

Agile, short-range interceptors, Spitfires were crucial in the 1940 Battle of Britain as the UK fought off the threat of an invasion by Nazi Germany.

On the 5th of August at 1.30pm, Matt Jones & Steve Brooks will depart from Goodwood Aerodrome in an attempt to climb "a pilot's Everest". Flying a 1943 #Spitfire around the 🌎. The dream is about to take flight. https://t.co/sOXz3wMJMt #SilverSpitfire #LongestFlight pic.twitter.com/ZMNKTlistc

A design classic with elliptical wings, the outline of a Spitfire is instantly recognisable.

"The Spitfire stands for freedom of humanity," Brooks said.

Of around 20,000 built, fewer than 250 survive, with only 50 or so of those still airworthy. They rarely fly and are mostly based in Britain.

A little over two weeks from now, two British pilots -- Steve Boultbee Brooks and Matt Jones -- will embark on an epic mission straight out of a Jules Verne book in a fighter aircraft from the glory days of Worl War II.

The mission hopes to honour those who designed, built, and flew the Spitfire and inspire those who see it to cherish their freedoms.

The silver plane will set off from Goodwood outside Chichester, near England's south coast and head north for Scotland.

It will then cross the Atlantic Ocean via the Faroe Islands, Reykjavik, Greenland and remote parts of northern Canada.

The sponsor-funded expedition will then cross North America, Asia, the Middle East and Europe, in around 90 legs.

The plane will fly past some of the world's most well-known sites, including the Grand Canyon, Mount Fuji, and some of the seven wonders of the ancient world in Egypt and Greece.

"To see the Silver Spitfire over the Golden Gate Bridge, the Statue of Liberty or the Pyramids of Giza is just going to be fantastic," said Brooks.

Other highlights include flying over Canada's Houses of Parliament with the Red Arrows, Britain's air force aerobatic team, and potentially flying above the Great Wall of China and landing on a road in India's "pink city" of Jaipur.

Brooks said being inside a Spitfire was an experience like no other.

"It's the most incredible feeling. Most aeroplanes you get into; a Spitfire, you wear. You strap it on and once you're in it, you are part of it," he said.

"It's like driving a classic car. It's got a real soul."

"The sound is unbelievable. You really get that drumming, beating engine resonating through your whole body," said Brooks.

The pilot, who was the first to fly Pole to Pole in a helicopter, said flying a Spitfire had its challenges.

"It's proper old technology. It's real seat-of-the-pants stuff," he said.

It is expected to return to Goodwood on December 8.

It flew on 51 combat missions, escorting bombers, conducting fighter sweeps over France and dive-bombing targets on the French coast.

It was in storage in a museum before its restoration began in 2017.

All 80,000 rivets and parts were dismantled, checked, cleaned and restored over two years.

Having stripped the military paint off, they decided to leave the gleaming original aluminium panels on show -- something never done before.

Brooks said: "It's like looking up and seeing mother nature wearing jewellery. It's a perfect piece of silver flying through the sky."