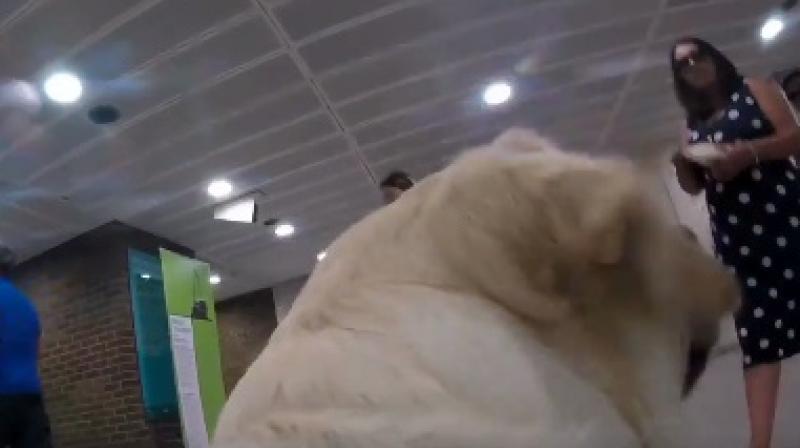 The footage captured by his canine guide has not always shown a city willing to help him. (Photo: Videograb)

London: A 37-year-old Indian-origin blind man in the UK has fitted his guide dog with a camera in a bid to highlight the discrimination and abuse he faces daily while travelling around London.

Amit Patel lost his eyesight five years ago to an eye disease known as keratoconus. He gets around London with the help of his guide dog, Kika, to whom Patel recently attached a GoPro camera to film the discrimination he faces every day from fellow Londoners.

"The city is a scary place. It's like someone put you in the middle of Trafalgar Square, turned you in a circle and said 'find your way home'," Patel was quoted as saying by BBC.

The footage captured by his canine guide has not always shown a city willing to help him.

"The video came out of necessity. Kika was getting hit by peoples' bags and she was getting a lot of abuse. A woman stopped me one day and had a go at me for holding everyone up and said I should apologise, which was a real shock," he said.

The former doctor found a solution attach a GoPro to Kika's harness and film every journey. Patel's wife, Seema, can then review the footage if it is felt there was something amiss about that day. And when alterations were made to a London train station the camera came into its own.

"I asked for help and no one came. The video shows lots of staff standing around me and this one guy looking over many times," Patel said.

"Eventually when the staff member actually came to me the first thing he said was 'sorry I didn't see you' and that really bugged me," he said.

The footage was sent to Network Rail giving Patel the "valuable evidence" needed to lodge a formal complaint about an incident he could not see.

The video had an impact and Network Rail investigated before giving further training to its staff.

Patel learned he had keratoconus, a condition which changes the shape of the cornea in the final year of medical school.

Lenses to push the corneas back into shape stopped working and six cornea transplants were rejected by his body until he was told "no more".

"There are taxi drivers who will see you and won't stop. You phone the company and they say they didn't see you, but you look at the footage and see them having looked at you and driving right past," he said.

Other incidents, Patel said highlight a lack of thought, especially on London's Underground.

"People assume, because I have a guide dog, I can walk around them but they make us walk near the tracks or I can say to Kika 'find me a seat' and I'll put my hand down on one and someone will sit on it and refuse to get up,? he said.