Officials in Mariupol, delaying an evacuation of the civilian population, accused Moscow’s troops of breaking a ceasefire 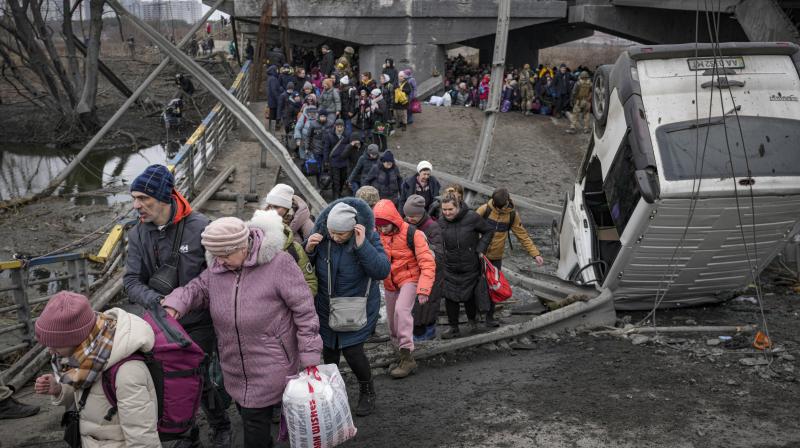 People cross on an improvised path under a bridge that was destroyed by a Russian airstrike, while fleeing the town of Irpin, Ukraine, Saturday, March 5, 2022. (AP photo)

Kyiv: Officials in the Ukrainian port city of Mariupol, surrounded by Russian forces, said on Saturday they were delaying an evacuation of the civilian population, accusing Moscow’s troops of breaking a ceasefire.

“Due to the fact that the Russian side does not adhere to the ceasefire and has continued shelling both of Mariupol itself and its environs and for security reasons, the evacuation of the civilian population has been postponed,” city officials said.

Mariupol, a southern city of about 450,000 people on the Azov Sea, was scheduled to begin the evacuations after Russian forces agreed a ceasefire to allow civilians to leave the fighting.

“We ask all Mariupol residents to disperse and head to places where they can shelter. More information about the evacuation will be posted soon,” municipal officials wrote.

“At the moment, negotiations are underway with Russia to establish a ceasefire and ensure a safe humanitarian corridor,” the statement added.

Russia’s defence ministry later accused Ukraine nationalists in Mariupol and Volnovakha — a town of 20,000 people near the rebel centre of Donetsk — of blocking Ukrainians from leaving towards Russia. “The same is happening in Kharkiv and Sumy, as well as in a number of other settlements,” the defence ministry said in a statement, referring to two other cities in eastern Ukraine at the centre of fighting. It said it respected the ceasefire and accused Ukrainian forces of shoring up defences during the halt.