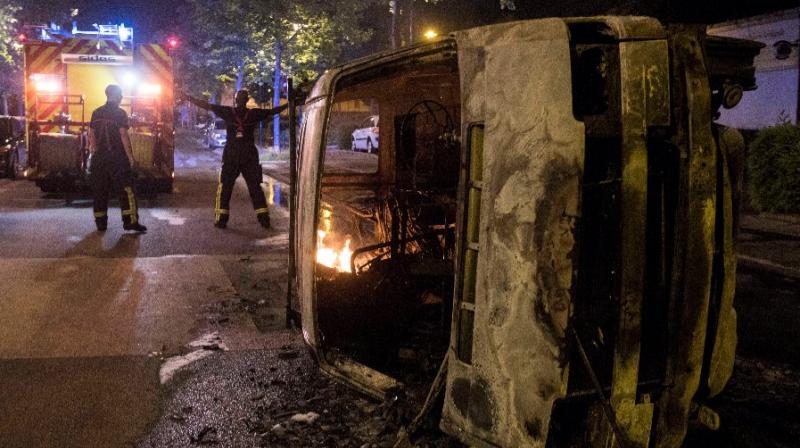 Fifty-two cars were torched overnight in Nantes, including the mayor's personal vehicle, and eight buildings were damaged by fire or vandalism. (Photo: @AFP/Twitter)

Nantes (France): Dozens of cars and several buildings were set alight Friday in a third night of rioting in western France over the fatal police shooting of a young man, the latest flare-up of tension between police and youths in poor suburbs with large immigrant populations.

An officer has been detained for questioning over the killing of the man identified by media as Aboubakar F. -- a death which has further strained relations in deprived urban areas where residents frequently complain of police brutality.

Fifty-two cars were torched overnight in Nantes, including the mayor's personal vehicle, and eight buildings were damaged by fire or vandalism, including a bar in a shopping centre which was destroyed by arson, officials said.

There were also arson attempts on a high school and a petrol station, but no injuries were reported and the violence subsided at around 6:00 am (0400 GMT).

Four people were taken in by police including a 14-year-old found with a petrol can and matches, and as on previous nights a police van was struck with a molotov cocktail.

There have been more than a dozen arrests over the riots, including one in the Paris suburb of Garges-les-Gonesse where the slain 22-year-old grew up, after youths threw Molotov cocktails at police and set dumpsters alight early Thursday.

On Thursday evening, around 1,000 people marched in Nantes calling for "justice for Abou" and demanding that the circumstances of his death be revealed.

Interior Minister Gerard Collomb said the government would do everything in its power "to calm the situation ... it is our duty to restore calm to Nantes, as we wish to do countrywide."

Aboubakar F. was under surveillance as part of a drug-trafficking investigation when he was stopped by police on Tuesday.

He was also wanted for robbery and other offences.

Police in Nantes said he was not carrying ID, gave a false name, and they attempted to arrest him.

Police sources said he drove into one of the officers, prompting his partner to open fire -- but a witness said the car was halted when the driver was hit in the neck by a single bullet.

The officer who fired the shot has been detained by a police oversight body, the IGPN, which is investigating the killing.

Sennes said he was being held on suspicion of "voluntary violence by a person in authority leading to unintentional death".

Local residents have been deeply upset by the scale of the destruction caused by the riots.

"It's too much, I don't understand it," Yamina, a kebab-shop owner, said in shock as she inspected her burnt-out restaurant and car.

"They are burning our neighbourhoods when we are already poor," said another woman who did not want to give her name, though she also expressed anger at the police who "are never there".

A woman who filmed the incident and wished to remain anonymous, said "there were no police behind the car, he didn't hit anyone. There was only the one gunshot".

The riot-hit districts of Nantes all have a history of gang violence.

In January, the government vowed a crackdown on urban violence after a shocking video emerged of a policewoman being beaten by a crowd in the Paris suburbs on New Year's Eve.

A parliamentary report released Tuesday showed high suicide rates within the police and warned low morale is widespread in the force.

In 2005, two teenagers of African origin were electrocuted while hiding from officers in the Paris suburb of Clichy-sous-Bois, sparking nationwide riots.