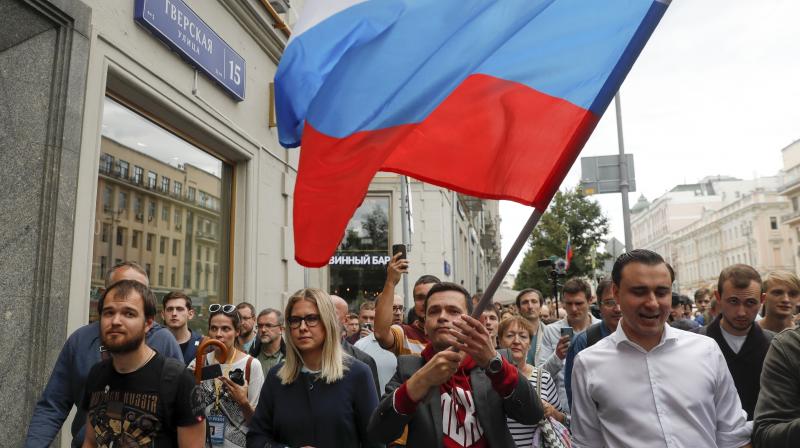 Russian opposition activist Lyubov Sobol, center left, opposition candidate Ilya Yashin, center right, candidate Ivan Zhdanov, right, and opposition candidate Alexei Minyalo walk during a protest in Moscow, Russia. They work with the organization of opposition leader Alexei Navalny, who is in a coma in a Berlin hospital after suffering what German authorities say was a poisoning with a chemical nerve agent while traveling in Siberia on Aug. 20. (AP)

Berlin: Germany, the current head of the European Union, will discuss possible sanctions on Russia over the poisoning of Alexei Navalny if the Kremlin does not provide an explanation soon, its foreign minister said Sunday.

Russian opposition leader Navalny fell ill on a flight last month and was treated in a Siberian hospital before being evacuated to Berlin.

"If in the coming days Russia does not help clarify what happened, we will be compelled to discuss a response with our allies," Heiko Maas told German daily Bild.

Any sanctions decided should be "targeted", he added.

Western leaders and many Russians have expressed horror at what Navalny's allies say is the first known use of chemical weapons against a high-profile opposition leader on Russian soil.

The Kremlin has denied responsibility for the attack and Foreign Minister Sergei Lavrov has said that Germany is yet to share any findings with Moscow's prosecutors.

Maas on Sunday said there were "several indications" that Russia was behind the poisoning, in the strongest accusations yet from Germany.

"The deadly substance with which Navalny was poisoned has in the past been found in the hands of Russian authorities.

"Only a small number of people have access to Novichok and this poison was used by Russian secret services in the attack against former agent Sergei Skripal," he said, referring to the 2018 attack in the English city of Salisbury.

On the subject of which sanctions could be discussed by the EU, Maas didn't rule out action relating to the disputed Nord Stream 2 pipeline.

The controversial 10-billion-euro ($11-billion) project is meant to deliver Russian gas to Europe, but has been strongly contested by the United States.

"I hope... that the Russians do not force us to change our position on Nord Stream," he said, adding that the consequences of any potential cancellation of the project would also need to be weighed, and that the debate on sanctions should not be "reduced" to one point.