Russia announces opening of humanitarian corridors in Kyiv, other cities

Russian forces, for humanitarian purposes, are declaring a 'regime of silence' from 10:00 am on 7 March, the Russian defence ministry said 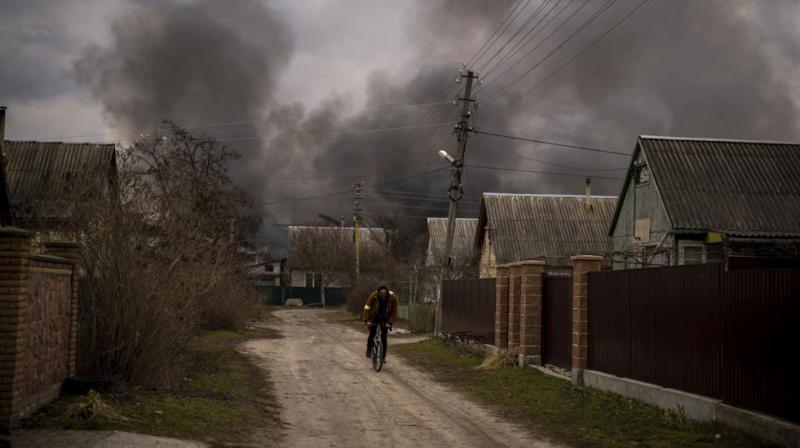 A Ukrainian man rides his bicycle near to a factory and a store burning after been bombarded in Irpin, on the outskirts of Kyiv, Ukraine, Sunday, March 6, 2022. (AP Photo/Emilio Morenatti)

MOSCOW: Russia said Monday it will open humanitarian corridors to allow the evacuation of civilians from several Ukrainian cities experiencing heavy fighting, including the capital Kyiv and the besieged port city of Mariupol.

"Russian forces, for humanitarian purposes, are declaring a 'regime of silence' from 10:00 am on 7 March and the opening of humanitarian corridors," the Russian defence ministry said in a statement.

It listed evacuation routes from the capital Kyiv as well as Mariupol, Kharkiv and Sumy -- all of which have been under heavy Russian attacks in recent days.

Moscow said the decision was taken after a "personal request" by French President Emmanuel Macron to Russia's Vladimir Putin.

The pair spoke on Sunday in their fourth conversation since Russia invaded Ukraine on February 24th.

Moscow said it had informed the UN, the OSCE and other international organisations of the corridors and called on Ukraine to "strictly fulfil all the conditions" of the evacuations.

"We expect concrete actions from the official Kyiv authorities, as well as from the leadership of the above cities mentioned," it said.

The Russian army pummelled Ukrainian cities from the air, land and sea on Monday, with warnings they were preparing for an assault on the capital Kyiv.

The relentless fire has pushed more than 1.5 million people across Ukraine's borders as refugees, though many others are displaced internally or trapped in cities being reduced to rubble by Russian bombardment.