World   Europe  07 May 2020  How bats carry coronavirus without getting sick
World, Europe

How bats carry coronavirus without getting sick

Stresses on bats, such as wet markets, other diseases, and habitat loss, may have a role in coronavirus spilling over to other species 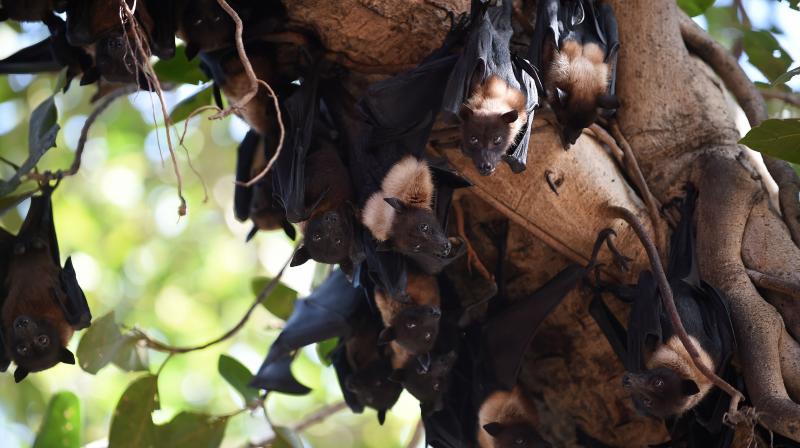 Toronto: Scientists have uncovered how bats can carry the MERS coronavirus without getting sick, shedding light on what triggers coronaviruses, including the one behind the COVID-19 pandemic, to jump to humans.

According to the study, published in the journal Scientific Reports, coronaviruses like the Middle East respiratory syndrome (MERS) virus, and the COVID19-causing SARS-CoV-2 virus, are thought to have originated in bats.

While these viruses can cause serious, and often fatal disease in people, bats seem unharmed, the researchers, including those from the University of Saskatchewan (USask) in Canada, said.

"The bats don't get rid of the virus and yet don't get sick. We wanted to understand why the MERS virus doesn't shut down the bat immune responses as it does in humans," said USask microbiologist Vikram Misra.

In the study, the scientists demonstrated that cells from an insect-eating brown bat can be persistently infected with MERS coronavirus for months, due to important adaptations from both the bat and the virus working together.

"Instead of killing bat cells as the virus does with human cells, the MERS coronavirus enters a long-term relationship with the host, maintained by the bat's unique 'super' immune system," said Misra, one of the study's co-authors.

"SARS-CoV-2 is thought to operate in the same way," he added.

Stresses on bats, such as wet markets, other diseases, and habitat loss, may have a role in coronavirus spilling over to other species, the study noted.

"When a bat experiences stress to their immune system, it disrupts this immune system-virus balance and allows the virus to multiply," Misra said.

The scientists, involved in the study, had earlier developed a potential treatment for MERS-CoV, and are currently working towards a vaccine against COVID-19.

While camels are the known intermediate hosts of MERS-CoV, they said bats are suspected to be the ancestral host.

There is no vaccine for either SARS-CoV-2 or MERS, the researchers noted.

"We see that the MERS coronavirus can very quickly adapt itself to a particular niche, and although we do not completely understand what is going on, this demonstrates how coronaviruses are able to jump from species to species so effortlessly," said USask scientist Darryl Falzarano, who co-led the study.

According to Misra, coronaviruses rapidly adapt to the species they infect, but little is known on the molecular interactions of these viruses with their natural bat hosts.

An earlier study had shown that bat coronaviruses can persist in their natural bat host for at least four months of hibernation.

When exposed to the MERS virus, the researchers said, bat cells adapt, not by producing inflammation-causing proteins that are hallmarks of getting sick, but instead by maintaining a natural antiviral response.

On the contrary, they said this function shuts down in other species, including humans.

The MERS virus, the researchers said, also adapts to the bat host cells by very rapidly mutating one specific gene.

These adaptations, according to the study, result in the virus remaining long-term in the bat, but being rendered harmless until something like a disease, or other stressors, upsets this balance.

In future experiments, the scientists hope to understand how the bat-borne MERS virus adapts to infection and replication in human cells.

"This information may be critical for predicting the next bat virus that will cause a pandemic," Misra said.