Massive demonstrations with more than 100,000 protesters are expected in Hamburg during the meeting of 20 nations on Friday and Saturday. 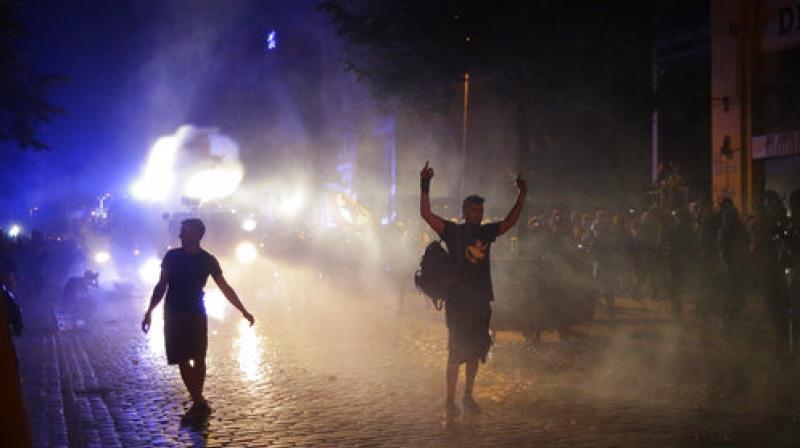 Police use water cannon against demonstrators during a protest against the G-20 summit in Hamburg, northern Germany (Photo: AP)

Hamburg: As many as 76 people were hurt in clashes with the German police here after the security force used water cannons on the people protesting against the G20 summit taking place in the city were pelting them with water bottles.

What should have been a peaceful march by around 12,000 people in Hamburg protesting against globalisation was halted as police used water cannon and tear gas to disperse around 1,000 far-left militants.

Police called with loudspeakers on protestors to remove their masks but this was ignored and after more objects were thrown, authorities decided to separate them from the other protestors, police said on Twitter.

"Unfortunately it has come to the first clashes. We are implementing corresponding measures," read another tweet.

Protesters were seen scrambling to leave the scene, while others defiantly stood in the way of water cannon trucks as they moved in surrounded by riot police with helmets and batons.

Police tweeted a photo of a car and flames and said shop windows were smashed.

The main "Welcome to Hell" march was then called off but thousands of people remained as night fell and demonstrators engaged in smaller skirmishes in the back streets of Germany's second city, AFP correspondents said.

Up to 100,000 demonstrators are expected before and during the two-day Group of 20 meeting gathering Trump, Russia's Vladimir Putin and Xi Jinping of China starting on Friday.

There were 20,000 police on standby together with armoured vehicles, helicopters and surveillance drones. A holding centre for detainees has been set up in a former hardware store with space for 400 people.

"War, climate change, exploitation are the result of the capitalist system that the G20 stands for and which 20,000 police are here to defend," demonstrator Georg Ismail told AFP.

- 'Welcome to hell' -
Major events like the G20 have in recent years usually been held in remote locations, but Germany was forced by its logistical demands to host it in a large city with a big venue and dozens of hotels.

Hamburg is desperate to avoid a rerun of the kind of major clashes seen at the 2001 G8 summit in Genoa or the Frankfurt opening of the new European Central Bank building in 2015.

In Hamburg, some 30 demonstrations have been announced, organised by anti-globalisation activists and environmentalists, trade unions, students and Church groups.

"Welcome to Hell" organiser Andreas Blechschmidt said the motto is "a combative message... but it's also meant to symbolise that G20 policies worldwide are responsible for hellish conditions like hunger, war and the climate disaster".

- Trump to meet Putin -
The main focus of attention inside the G20 venue on the first day of the summit on Friday will be Trump's first face-to-face meeting with Putin.

Speaking in the Polish capital earlier on Thursday in front of 10,000 people, Trump didn't mince his words about Moscow.

"We urge Russia to cease its destabilising activities in Ukraine and elsewhere, and its support for hostile regimes -- including Syria and Iran -- and to instead join the community of responsible nations in our fight against common enemies and in defence of civilisation itself," he said.

Arriving in Hamburg later Thursday, Trump headed to talks with German Chancellor Angela Merkel, who has vowed to defend the 2015 Paris climate accord despite the US leader's decision to withdraw.

Merkel said before meeting the US president that Trump was facing isolation within the G20 over the issue -- one of several topics where the new US leader is likely to clash with his fellow leaders.

"We are not going to paper over the differences but rather, we will call discord discord. Because there are also different opinions on some important questions," Merkel said.

Trump held a dinner with leaders of South Korea and Japan, focusing on North Korea's successfully test of an intercontinental ballistic missile this week. He tweeted afterwards only that the meeting was "great".

In his first public remarks since the test, Trump said in Warsaw that Pyongyang's military sabre-rattling must bring "consequences" and warned he was considering a "severe" response to its "very, very bad behaviour".