A White House source confirmed that Trump will only be joined in the meeting by Secretary of State Rex Tillerson and a translator. 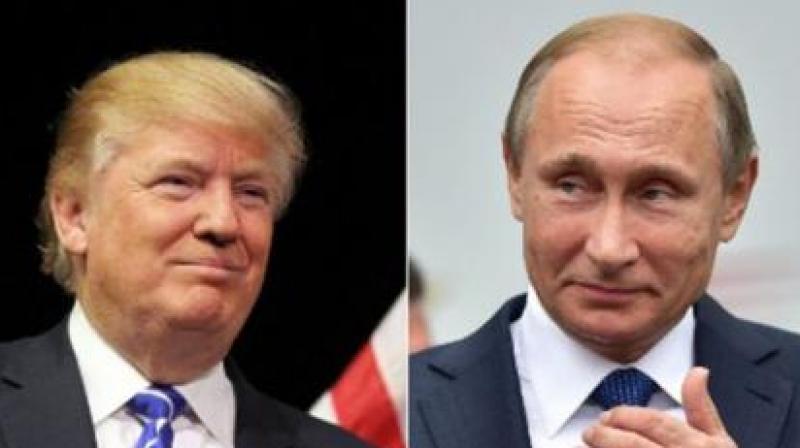 US also extended a hand of cooperation to Russia, voicing willingness to work together on establishing 'no-fly zones' in Syria.

Hamburg: US President Donald Trump meets Russian leader Vladimir Putin for the first time Friday, in an eagerly awaited encounter at a G20 summit marked by the growing divide between America and its Western allies.

On the eve of a face-off that carries consequences for world crises including the wars in Syria and Ukraine, Trump set the tone Thursday with a strong attack against Moscow for its “destabilising” actions.

The property tycoon and the ex-KGB agent’s first meeting promises to be dissected frame by frame, with their handshake and body language to be scrutinised for any sign of rapprochement or estrangement.

“While Trump’s pro-wrestling approach is showy, bombastic and impulsive, Putin thrives on judo’s discipline and mental toughness, where a core technique is to keep an opponent off-balance and exploit his weakness,” noted Derek Chollet from think-tank German Marshall Fund.

“How these contrasting styles of machismo interact... will likely be the defining feature of their relationship moving forward.”

The Kremlin said the meeting was crucial for regional security and stability, with Putin saying earlier this year that US-Russia ties appeared to have deteriorated under Trump.

The blockbuster bilateral comes on the sidelines of what is expected to be the most fraught G20 summit in years in the German city of Hamburg.

- End ‘destabilising’ action -
Trump had alarmed Western partners wary of a resurgent Moscow with his refrain on the campaign trail pledging to have a “great relationship with Putin and Russia”.

But amid accusations that Moscow had a hand in propelling him to the White House, Trump finds himself in a tight spot over his complex relationship with the Russian leader.

In a key speech in Warsaw marking his first stop on his European tour, Trump fired a rare salvo of criticism.

“We urge Russia to cease its destabilising activities in Ukraine and elsewhere, and its support for hostile regimes -- including Syria and Iran -- and to instead join the community of responsible nations in our fight against common enemies and in defence of civilisation itself,” he told a cheering crowd of 10,000.

He admitted that Moscow “may have” tried to influence the 2016 election that brought him to power, but also suggested others too may have been involved and blamed predecessor Barack Obama for failing to act.

Read: 76 people hurt in clashes with police over G-20 protest in Germany

- Pros in the room -
When Trump and Putin sit down for their afternoon meeting, they will not be short of crucial issues to discuss, including the wars in Syria and Ukraine, North Korea’s nuclear programme and efforts to combat terrorism.

A White House source confirmed to AFP that Trump will only be joined in the meeting by Secretary of State Rex Tillerson and a translator, an extraordinarily small cast list that raised concerns among experts.

“Neither Tillerson or Trump have any experience of foreign policy. That is one reason why they need pros in the room when meeting Putin,” said Thomas Wright of the Brookings Institution, who added that Trump was now more likely to appease Putin.

Former US ambassador to Russia Michael McFaul expressed concern that Trump’s National Security advisor HR McMaster and his team -- seen as moderating influences in the White House -- were being sidelined.

“Putin likes small meetings. This means WH is letting Kremlin dictate the terms of this meeting. HR, at a minimum, should also be there,” he wrote on Twitter.

Ahead of the talks, the US also extended a hand of cooperation to Russia, voicing willingness to work together on establishing “no-fly zones” in Syria as part of a joint effort to stabilise the war-ravaged country.

Read: G20: All you need to know about the annual summits of leading powers

In his first public remarks since the test, Trump said in Warsaw that Pyongyang’s military sabre-rattling must bring “consequences” and warned he was considering a “severe” response to its ‘very, very bad behaviour”.

After repeatedly urging Beijing to ratchet up the economic pressure on North Korea, Trump will hold what promises to be a testy meeting with Chinese President Xi Jinping on the sidelines of the G20.

At a dinner meeting grouping north-east Asian leaders but which excluded Xi, Trump was asked if he had given up on the Chinese leader, but replied: “Never give up.”