Narendra Modi has bilateral meetings lined up with various leaders, including from Japan, South Korea and Vietnam. 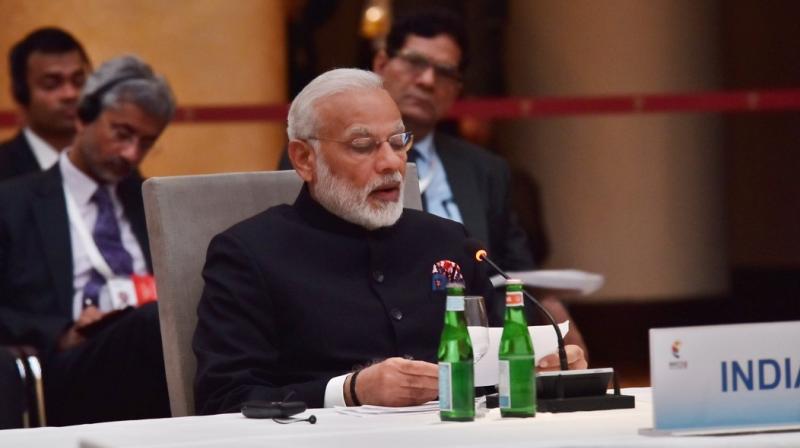 Modi will participate in the leaders' retreat and the sessions on Global Growth and Trade and on Sustainable Development, Climate and Energy. (Photo: Twitter/MEA India)

Hamburg: The G20 Summit began on Friday in this port city as world leaders assembled to discuss fight against terrorism and ways to improve open trade while Prime Minister Narendra Modi met his counterparts from the BRICS bloc.

While host German Chancellor Angela Merkel welcomed the leaders to open the 12th G20 Summit, a separate meeting of BRICS leaders took place on the sidelines.

The official details of the BRICS meet could not be immediately ascertained. Outside the Summit venue, violent protests continued by various rights groups, including anti-capitalist groupings.

The police had to resort to water canons, tear gas and pepper spray. Modi reached here last evening and has bilateral meetings lined up with various leaders, including from Japan, South Korea and Vietnam.

Modi will participate in the leaders' retreat and the sessions on Global Growth and Trade and on Sustainable Development, Climate and Energy. Later in the evening, he will attend a concert for leaders at Elphilharmonie.

This port city has been converted into a fortress for the Summit, which is being attended by 4,800 journalists from more than 67 countries.

Fighting terrorism, climate change and global trade are expected to be the key areas of discussion at the two-day Summit, whose theme is 'Shaping an Inter-connected World'. The meet is taking place at a time when differences have emerged among several leaders expected to be present -- mostly on publicly stated views of US President Donald Trump -- including on issues like climate change and open trade.

Russia's Vladimir Putin, Turkey's Recep Tayyip Erdogan, France's Emmanuel Macron and the UK's Theresa May will be participating in the Summit.

While Hamburg happens to be city of birth for the Summit host Merkel, it is also known as an 'anti-establishment bastion' of Left-wing radicals.

At least 30 protests are expected to be held here ahead of the Summit that may attract thousands of people, including from anti-capitalist groups. Local authorities expect these protests to remain peaceful and around 15,000 police personnel will be deployed to protect the venue. Besides, nearly 4,000 personnel will keep a tab on the airport and train security.

While counter-terrorism and economic reforms will dominate the discussions, the Summit will also discuss issues like free and open trade, climate change, migration, sustainable development and global stability.

Prior to the Summit, Modi had said he was looking forward to "engaging leaders from other G20 countries on the vital issues affecting our world today that have a bearing on economic growth, sustainable development, and peace and stability".

The prime minister had said the world leaders would review progress on decisions since the Hangzhou Summit last year and deliberate on issues of terrorism, climate, sustainable development, growth and trade, digitisation, health, employment, migration, women's empowerment, and partnership with Africa.

Modi is to hold meetings with leaders of countries like Canada, Japan, and the UK on the sidelines of the Summit. "The prime minister is visiting Hamburg from July 6-8 for the G-20 Summit. His pre-planned bilateral meetings on the sidelines of the Summit are with Argentina, Canada, Italy, Japan, Mexico, ROK (Republic of Korea), the UK and Vietnam," External Affairs Ministry spokesperson Gopal Baglay said on Thursday.