The footage appeared to show Trump extending his hand to Kornhauser-Duda, who walks straight past it to greet his wife, Melania Trump. 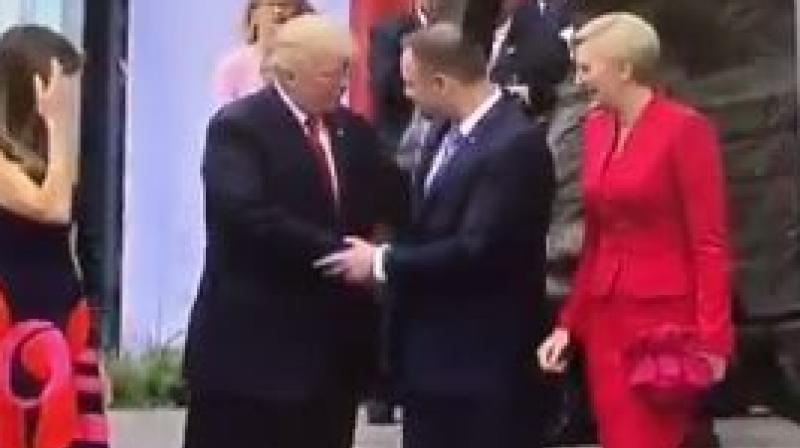 The US and Poland's presidential couples were shaking hands Thursday before Trump's speech in front of a crowd in Poland. (Photo: Youtube grab)

Warsaw: After the internet exploded with the video of Polish First Lady appearing to snub Trump's handshake offer and greeting Melania instead, Polish President Andrzej Duda has cleared the air over the seemingly awkward development.

The footage appeared to show Trump extending his hand to Kornhauser-Duda, who walks straight past it to greet his wife, Melania Trump.

Contrary to some surprising reports my wife did shake hands with Mrs. and Mr. Trump @POTUS after a great visit. Let's FIGHT FAKE NEWS.

Now, while some have perceived it as a snub, it seems equally possible that Kornhauser-Duda did not see the US President's hand extended to her.

In an attempt to clear the air surrounding his wife, the Polish President took to Twitter and training his guns on 'fake news'.

The President then re-tweeted a video where after greeting the US first lady, Kornhauser-Duda then turns to shake Trump's hand.

So it seems to appear that President Duda has joined Trump's anti-'Fake News' campaign.