Demonstrations have carried on throughout the four weeks since the election, gaining in size on the weekends 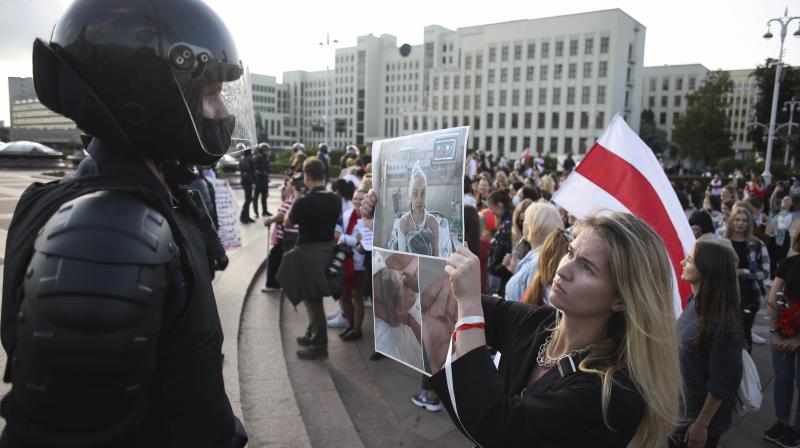 A woman shows a photo of bitten detained protesters to riot police at Independence Square during an opposition rally to protest the official presidential election results in Minsk, Belarus, Saturday, Sept. 5, 2020. Women's marches and demonstrations have become a regular feature of the four weeks of protest that have shaken Belarus following a disputed election that gave Belarusian President Alexander Lukashenko a sixth term in office. (AP)

Minsk: Security forces in Belarus detained scores of protesters and were filmed beating a man as he lay on the street, as the authorities launched a crackdown on mass demonstrations against President Alexander Lukashenko.

Nearly a month after an election which Lukashenko’s opponents say he rigged, tens of thousands of people marched through Minsk, many decked out in red-and-white opposition colours and shouting “go away!” and “you’re a rat!”.

The authorities had laid barbed wire on the streets, and deployed military vehicles, prisoner vans, water cannons, helmeted riot police and plain clothes officers with masks and truncheons to try to contain the demonstrations.

At least 100 people were detained, the Russian news agency Interfax quoted the government as saying, while the human rights group Spring-96 put the figure at more than 200. Local media also showed protests and detentions in other cities.

A witness said the harsh treatment of the protesters appeared to mark an escalation by the authorities after weeks of comparative restraint, although the violence was not as widespread and indiscriminate as in the protests’ first days.

Footage from local media outlet TUT.BY showed a masked man beating a protester as he lay on the ground. Plain clothes officers could be seen smashing the glass door of a cafe to get at protesters sheltering inside.

“We ran into a cafe to hide from the riot police, they broke the glass, burst inside, pulled out three people, beat at least one,” Evgeny, a 28-year-old protester, said while waiters cleaned up the smashed glass.

JUMPING INTO THE RIVER

A witness described helmeted security forces and men in plain clothes detaining at least two dozen protesters near President Alexander Lukashenko’s residence, and beating and kicking another man as he lay on the ground.

Some protesters left chanting “we’ll be back”.

An ambulance arrived at another cafe, where another witness said a man had been beaten by men with truncheons and could only walk with difficulty.

TUT.BY described people jumping into the Svislach River to escape the police in Minsk. Protests also took place outside the capital. In the city of Brest near the Polish border, video footage from TUT.BY showed women shouting “shame” at masked members of the security forces who dragged people away.

“They talk about the brutality of the Belarusian police, and I want to say this: there are no more humane, restrained and cool-headed police anywhere in the world,” he said, according to the official Belta news agency.

Lukashenko, in power since 1994, denies electoral fraud. Buoyed by a show of support from traditional ally Russia, he has rejected calls for new elections.

Demonstrations have carried on throughout the four weeks since the election, gaining in size on the weekends and drawing tens of thousands of people each Sunday.

Western countries have had to balance sympathy with the Belarusian pro-democracy movement against a desire not to provoke Moscow. The crisis has tested European resolve at a moment when countries are also weighing how to respond to the suspected poisoning of Russian opposition figure Alexei Navalny.

In an interview published in the Financial Times on Sunday, Lithuania’s foreign minister urged the European Union to impose sanctions on Belarus and counter Russia’s influence or risk undermining the credibility of its foreign policy.