No one has claimed responsibility for the Stockholm attack, the third in Europe in two weeks after those in London and Saint Petersburg. 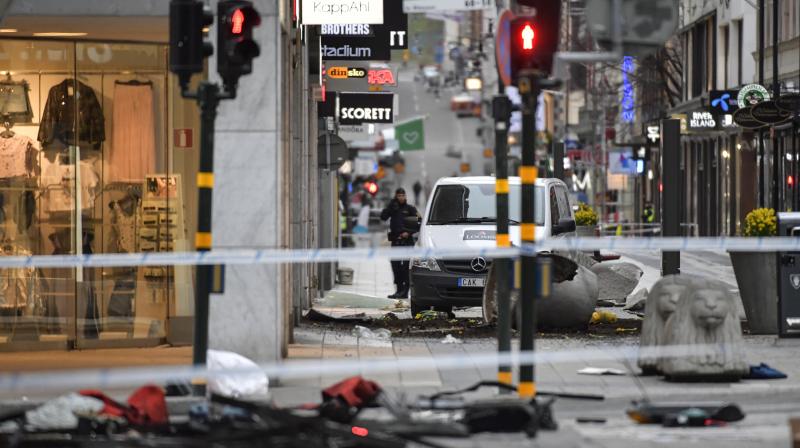 A police officer stands at the cordoned off area following a suspected terror attack on the Drottninggatan Street in central Stockholm, Sweden. (Photo: AP)

Stockholm (Sweden): Flags flew at half-mast across Stockholm on Saturday as the city woke in mourning, a day after a truck attack that killed four as police said they had the suspected driver in custody.

A stolen beer truck ploughed into a crowd of people at the corner of the bustling Ahlens department store and the pedestrian street Drottninggatan on Friday afternoon, above ground from Stockholm's central subway station.

It was the latest in a string of similar assaults with vehicles in Europe, including in London, Berlin and the southern French city of Nice, all claimed by the so-called Islamic State (IS).

"Terror hits the heart of the city," Sweden's biggest broadsheet Dagens Nyheter headlined its front page above a picture of the truck with its front end smashed into the store.

Prime Minister Stefan Lofven said he had strengthened the country's border controls, as flags flew at half-mast at parliament, the royal palace, the government offices, and City Hall.

"Terrorists want us to be afraid, want us to change our behaviour, want us to not live our lives normally, but that is what we're going to do. So terrorists can never defeat Sweden, never," Lofven said.

Streets were empty on Saturday morning, apart from a heavy police presence. A small crowd milled by the security cordon around the scene, as passersby laid down flowers.

Swedish police said early Saturday that a man arrested on "suspicion of a terrorist crime" was likely the truck driver. "We suspect that the man who was arrested is the perpetrator," Stockholm police spokesman Lars Bystrom told AFP.

The man was arrested "on suspicion of a terrorist crime through murder," Karin Rosander, spokeswoman at the Swedish Prosecution Authority, said.

The man was detained on Friday in Marsta, a suburb north of Stockholm. According to several media outlets, he is a 39-year-old of Uzbek origin and an IS supporter.

Prosecutors did not disclose his identity, but police said his appearance "matched the description" of a photo they released of a suspect wearing a dark hoodie and military green jacket.

"The Jihadist threat has long been minimised," Swedish daily Expressen wrote on Saturday, though there was no official confirmation that police were investigating that possibility.

Witnesses described scenes of terror and panic on Friday. "A massive truck starts driving ... and mangles everything and just drives over exactly everything," eyewitness Rikard Gauffin told AFP.

"It was so terrible and there were bodies lying everywhere... it was really terrifying," he added. Passerby Hasan Sidi told Aftonbladet he saw two elderly women lying on the ground.

He said people at the scene urged him to help one of the women who was "bleeding to death". "One of them died... I don't know if the other one made it," Sidi said.
The truck was towed away in the early hours of Saturday. Police cars and ambulances rapidly flooded the scene after the attack, as central streets and squares were blocked off amid fears that another attack could be imminent.

An attack on Stockholm was just a matter of time, the head of the Centre for Asymmetric Threat Studies at the Swedish National Defence College, Magnus Ranstorp, told AFP.

"It was pretty expected, the police and intelligence agency have practised for this several times the past year... We just didn't know when it was going to happen," he said.

Friday's attack was the latest in a string of similar assaults with vehicles in Europe, including in London, Berlin and the southern French city of Nice.

The deadliest came last year in France on the July 14 Bastille Day national holiday, when a man rammed a truck into a crowd in the Mediterranean resort of Nice, killing 86 people.

Last month, Khalid Masood, a 52-year-old convert to Islam known to British security services, killed five people when he drove a car at high speed into pedestrians on London's Westminster Bridge before launching a frenzied knife attack on a policeman guarding the parliament building.

And in December, a man hijacked a truck and slammed into shoppers at a Christmas market in Berlin, killing 12 people.

In 2014, IS called for attacks on citizens of Western countries and gave instructions on how they could be carried out without military equipment, using rocks or knives, or by running people over in vehicles.

Friday's attack was the second terror attack in Stockholm. In December 2010, a suicide bomber blew himself up, also on the Drottninggatan pedestrian street, lightly injuring several passersby.