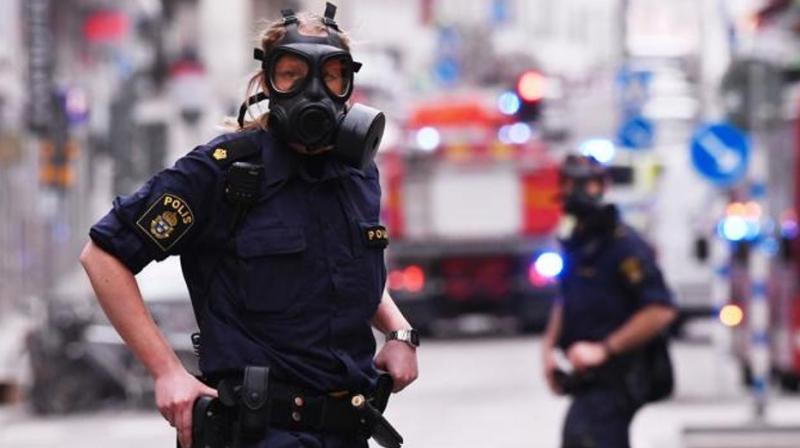 Police have arrested one suspect in the truck attack but would not say if they are hunting for any others. (Photo: AFP)

Stockholm: Sweden said on Saturday it had strengthened border controls after an unidentified attacker ploughed a truck through a crowd into a department store in central Stockholm, killing four people and injuring 15.

"I have decided to strengthen our border controls," Prime Minister Stefan Lofven told reporters, as police said they were still hunting the truck driver.

Swedish Prime Minister Stefan Lofven said "the country is in a state of shock" over the stolen beer truck attack that killed four people and wounded 15 others in downtown Stockholm.

Lofven said "the aim of terrorism is to undermine democracy. But such a goal will never be achieved in Sweden."

Police have arrested one suspect in the truck attack but would not say if they are hunting for any others. They discouraged people from going into central Stockholm on Friday night, and the national theater, which is near the crash site, canceled three plays.

Lofven said in a national televised address that his Social Democratic Party was still planning to hold its annual convention this weekend in Goteborg, Sweden's second-largest city.

Meanwhile, Swedish police said they have arrested one man "whom we are particularly interested in" in the deadly stolen beer truck attack in Stockholm.

Jan Evensson from the Stockholm police told a news conference late Friday the man was arrested in Marsta, a northern Stockholm suburb close to the city's international airport, Arlanda. He says the man was "in the vicinity" of the truck crash that killed four people and wounded 15 others on a pedestrian street in the Swedish capital.

He says the suspect was spotted by a police patrol and was in a police photo released earlier Friday wearing a greenish hood at the top of an escalator. Stefan Hector of the Sweden's national police says "we have a working hypothesis this is an act of terror." Evensson urged people not to go into central Stockholm for the time being.