Israeli Prime Minister Benjamin Netanyahu sought to energise supporters on the eve of Elections with warnings and controversial promises. 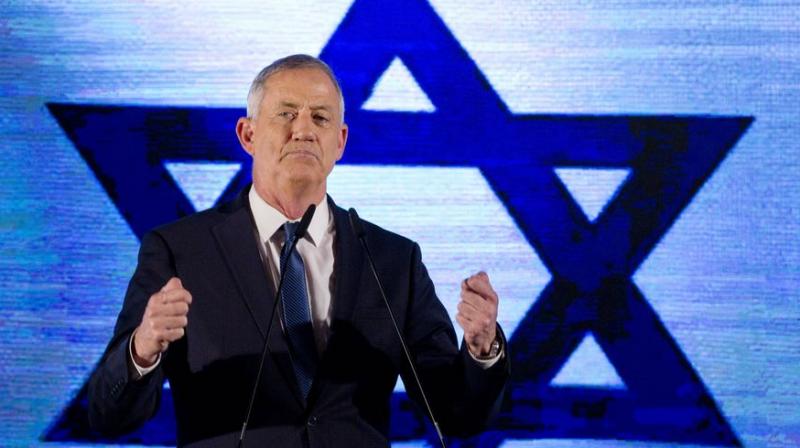 Jerusalem: Israeli Prime Minister Benjamin Netanyahu sought to energise supporters on the eve of Tuesday's elections with warnings and controversial promises, while his centrist challenger urged voters to tell the premier the country has had enough.

The general election in which Netanyahu is seeking to extend his already 13 years in office despite corruption allegations against him is expected to be close, with ex-military chief Benny Gantz posing a serious threat.

They spent the campaign's final hours exhorting voters with two different strategies: Netanyahu repeatedly warned that his Likud was at risk of losing, while Gantz made the case that Israel was on the verge of historic change. The truth was more complicated, with opinion polls giving Netanyahu's Likud and Gantz's Blue and White a similar number of seats in the 120-seat parliament.

Under those polls, both would fall far short of an outright majority and would need to pull together a coalition. If polling trends hold, Netanyahu would be best placed to do so thanks to smaller right-wing parties allied to him. There have however been repeated warnings of the unreliability of polls in the past and the fact that many voters say they remain undecided.

Netanyahu's claims that Likud may lose were widely seen as a way to ensure his base of supporters turn out to vote. Netanyahu has made last-minute appeals to the right, issuing a deeply controversial pledge to annex settlements in the occupied West Bank. If done on a large-scale, applying Israeli sovereignty there could end any remaining hopes for a two-state solution with the Palestinians.

In an interview on Sunday, Netanyahu said US President Donald Trump, who is expected to release his long-awaited deal for Israeli-Palestinian peace sometime after the election, was aware of his plans to do so. He said he planned to apply sovereignty gradually, and that he did not differentiate between Israel's large West Bank settlement blocs and the isolated ones located deep in the territory on land the Palestinians see as part of a future state.

"Who else can do this? Who can do this? Come on. Honestly," Netanyahu said, making the case as he has throughout the campaign that he is Israel's essential statesman.

He says he favours a "globally backed peace agreement" that sees Israel hold on to the large settlement blocs in the West Bank and maintain security control over the territory.

Gantz has also highlighted his security credentials while saying he will heal divisions he accuses Netanyahu of exacerbating.

"There's a need for change and an opportunity for change," Gantz told Israel's army radio on Monday. "Israel needs to choose a direction of unification, connection and hope -- or of extremity."

The two were also engaging in typical pre-election campaigning, including Gantz riding a motorcycle to his rally on Sunday and Netanyahu visiting Jerusalem's main market on Monday.

Netanyahu will be on track to surpass founding father David Ben-Gurion as Israel's longest-serving prime minister should he win on Tuesday. But even if he does, he faces the prospect of becoming the first sitting prime minister to be indicted. The attorney general has announced he intends to indict Netanyahu for bribery, fraud and breach of trust pending an upcoming hearing.

The premier's opponents have seized on the allegations to argue that the 69-year-old Netanyahu has lost his way and must go. But Netanyahu has been defiant, calling the investigations a "witch hunt" and denouncing journalists reporting on them -- similar to the tactics used by his ally Trump.

While the threat of indictment hangs over Netanyahu, he has also built a reputation as guarantor of Israel's security and economic growth. He has repeatedly spoken of Trump's recognition of the disputed city of Jerusalem as Israel's capital and Israel's sovereignty over the Golan Heights as two of his major accomplishments.

Gantz has sought to overcome that in part by allying with two other former military chiefs of staff and ex-finance minister Yair Lapid.