Climate Crises—Paris to Marrakesh to Bonn

With the US threatening to chuck Paris Agreement, the two countries that would have to scale up their commitments are China and India. 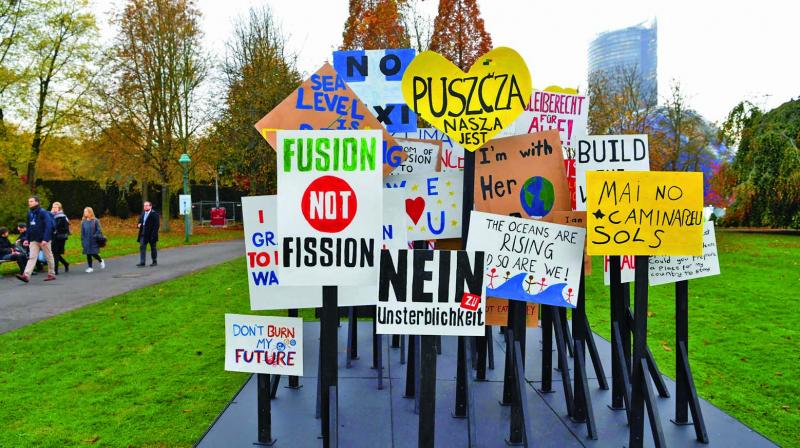 When the Industrial Revolution began no one could have imagined what triggers it was going to pull.  Everyone felt that there would be prosperity and happiness for all.

According to the writings of the Baha’i Faith: “…The deepening environmental crisis, driven by a system that condones the pillage of natural resources to satisfy an insatiable thirst for more, suggests how entirely inadequate is the present conception of humanity’s relationship with nature.”

“The deterioration of the home environment, with the accompanying rise in the systematic exploitation of women and children worldwide, makes clear how pervasive are the misbegotten notions that define relations within the family unit; the persistence of despotism, on the one hand, and the increasing disregard for authority, on the other, reveal how unsatisfactory to a maturing humanity is the current relationship between the individual and the institutions of society.”

“The concentration of material wealth in the hands of a minority of the world’s population gives an indication of how fundamentally ill-conceived are relationships among the many sectors of what is now an emerging global community.”

The United Nations’ 2030 Agenda for Sustainable Development, now in its second year, offers a more balanced attitude toward the environment addressing human conditions as consciously as it does natural ones.

It must be embodied in social norms and patterns of action of religious communities and characterized by justice and equity to provide for an evolving vision of our common future together.

And that vision, in turn, stands as a powerful mechanism for mobilizing action around the world and coordinating numerous efforts into mutually-reinforcing lines of action.

To this end, Laudato si, the 2015 ‘green encyclical’ released by Pope Francis has particular relevance to the upcoming U. N. Climate Change Conference, COP23, from November 6-17, 2017.

Fiji is presiding over COP23 in Bonn with the support of the government of Germany.

The provisions laid down by Paris Agreement of 2015 have to be concluded by 2018.

For developing countries the challenges would be to ensure ‘differentiation’ in the responses, ensuring equity and adequate finances, technology, to raise the ambition of the industrialized countries to meet Paris climate goals and ensure that the Pre 2020 commitments of the parties to the Kyoto Protocol are met.

Along with these, the area of concern would be to ensure transparency, the role of market mechanisms, loss and damage due to natural disasters, inter alia.

With the United States threatening to chuck the Paris Agreement, the two countries that would have to scale up their commitments are China and India.

Time is short, the clock is ticking loudly in the background.

The Pope’s encyclical focuses on the whole gamut of ecological crises grouped into some 246 individual points— it is based unequivocally on the scientific consensus that global warming is taking place and that climate change is man-made; it rejects the denial of anthropogenic warming.

Secondly, it unmasks the political and economic structures of power behind the climate change debate and stresses the importance of non-state actors in achieving change.

Lastly, defines the atmosphere and the environment as a common good rather than a “no man’s land”, available for anyone to pollute.

This underlines that climate change is strongly related to the issues of justice and property rights.

Although the encyclical puts a focus on the poor it is not merely a moral scripture. It is also no ordinary appeal to governments to act.

On the contrary, it explicitly states that international negotiations have so far not made significant progress (169) and accuses international politics of its weak response (54).

In addition, the Pope unmasks in very clear terms the political interests of those who deny climate change and hinder mitigation: “Many of those who possess more resources and economic or political power seem mostly to be concerned with masking the problems or concealing their symptoms, simply making efforts to reduce some of the negative impacts of climate change”.

The Pope does not address governments as main actors, nor does he frame the climate problem only as the responsibility of each individual. Instead, the encyclical underlines the importance of collective actors such as cooperatives, non-governmental organizations and civil society.

However, the encyclical remains rather unspecific concerning concrete recommendations for action to prevent climate change and overcome poverty.

The Pope does not comment on whether the 2°C temperature limit is adequate or whether 1.5°C would be more appropriate from the perspective of the poorest.

Concerning energy sources, the Pope often refers to renewable energy and explicitly states that coal, oil and gas “need to be progressively replaced without delay”.

But he does not provide any further details on transformation scenarios or requirements for specific technologies.

This is for good reason; it is not the task of the Pope to intervene in the detailed mechanics of politics. In this sense, the Pope also recognizes the different areas of competence of religion, politics, and science.

The Baha’i community has been stressing that individual actions, howsoever laudable, will achieve little, nation-states must unitedly make a difference to craft an international climate agreement serving as a foundation for the governance of the global commons.

The fact that the commons can indeed be successfully managed has already been proven at the local level: Elinor Ostrom, the first woman to win a shared Nobel Prize for economic sciences in 2009, has shown that communities can develop diverse institutional arrangements for managing the commons without over exploitation. It is now time to show that the management of global commons is collectively possible.

Perhaps this is the overarching message of the Pope’s encyclical: the fair management of the global commons is one of the most important tasks of the 21st century.

This can only be successful if other religious communities and a large number of actors across different levels of governance, ranging from global, to regional and local, link up together.  COP 23 must acknowledge the contribution of religious communities to building a foundation on which prosperity of humanity can be ever more effectively pursued for this and future generations.

The writer is a national trustee of the Lotus Temple & Baha’i Community of India; and general secretary of the Temple of Understanding India Foundation.