Officers then detained another 16-year-old male Saturday on suspicion of robbery. 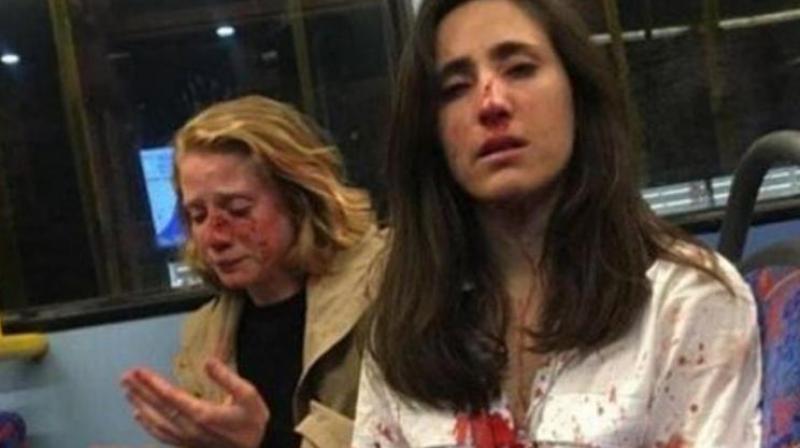 Police said the incident happened in the early hours of May 30 after the two women got on the bus in north London headed to the Camden Town neighbourhood. (Photo: Facebook/ Melania Geymonat)

London: British police on Saturday released on bail five teenagers arrested following a homophobic attack on a lesbian couple who refused to kiss for a gang of youths on a London night bus.

Melania Geymonat, 28, said she and her girlfriend Chris were robbed and left covered in blood after the incident on a bus in the north of the British capital last week.

London's Metropolitan Police on Friday arrested four teens aged between 15 and 18 on suspicion of involvement in what a senior officer called the "disgusting attack".

Officers then detained another 16-year-old male Saturday on suspicion of robbery.

"(The) five arrested have been bailed to a date in early July," the Met said in a statement.

"Officers are not currently looking for any other parties in connection with the incident." Geymonat told the BBC on Friday that the gang surrounded the couple while aboard the top deck of the bus.

"They started saying really aggressive stuff, things about sexual positions, lesbians and claiming we could kiss so they could watch us," she said.

"They started throwing coins. The next thing I know Chris is in the middle of the bus and they are punching her.

"So I immediately went there by impulse and tried to pull her out of there and they started punching me. I was really bleeding."

Police said the incident happened in the early hours of May 30 after the two women got on the bus in north London headed to the Camden Town neighbourhood.

The women were punched several times before the males ran off the bus after also stealing a phone and bag, the Met added.

Both women were taken to hospital for treatment to facial injuries. "This was a disgusting attack on two women," said Detective Superintendent Andy Cox.

"CCTV footage from the attack is being reviewed by detectives.

"We continue to appeal for information from the public," he added.

Geymonat is from Uruguay while British newspapers reported that her girlfriend is from the US. She told the BBC she has previously experienced "a lot of verbal violence" but had never been assaulted before because of her sexuality. "I was and still am angry," she said.

"It was scary, but this is not a novel situation." British Prime Minister Theresa May on Friday condemned the incident.

"This was a sickening attack and my thoughts are with the couple affected," she said.

"Nobody should ever have to hide who they are or who they love and we must work together to eradicate unacceptable violence towards the LGBT community."