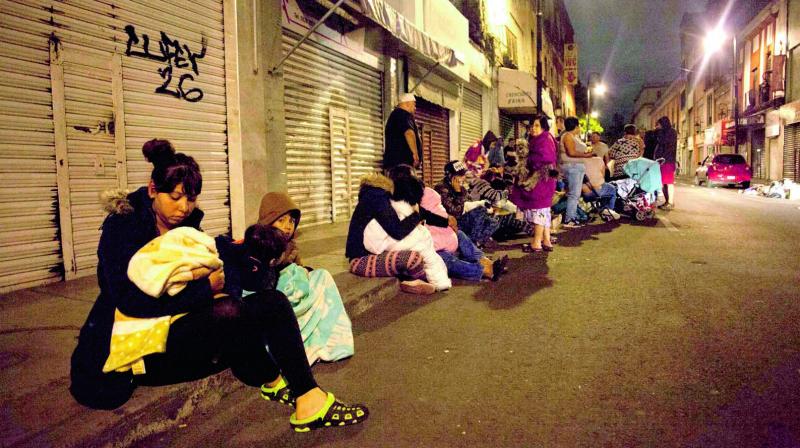 People gather on a street in downtown Mexico City on Thursday during an earthquake. (Photo: AFP)

Mexico City: One of the most powerful earthquakes ever recorded in Mexico struck off the country's southern coast, toppling hundreds of buildings and sending panicked people fleeing into the streets in the middle of the night. At least 61 people were reported dead.

The quake that hit minutes before midnight Thursday was strong enough to cause buildings to sway violently in the capital city more than 650 miles (1,000 kilometers) away. As beds banged against walls, people still wearing pajamas ran out of their homes and gathered in frightened groups.

The furious shaking created a second national emergency for Mexican agencies already bracing for Hurricane Katia on the other side of the country. The system was expected to strike the Gulf coast in the state of Veracruz late Friday or early Saturday as a Category 2 storm that could bring life-threatening floods.

President Enrique Pena Nieto said Friday evening in a televised address that 61 people were killed - 45 in Oaxaca state, 12 in Chiapas and 4 in Tabasco - and he declared three days of national mourning.

The worst-hit city was Juchitan, on the narrow waist of Oaxaca known as the Isthmus, where 36 quake victims died. About half of Juchitan's city hall collapsed in a pile of rubble and streets were littered with the debris of ruined houses. A hospital also collapsed, Pena Nieto said after touring the city and meeting with residents. The patients were relocated to other facilities.

The president said authorities were working to re-establish the supply of water and food and provide medical attention to those who need it. He vowed the government would help people rebuild and called for people to come together.

Mexico City escaped major damage, but the quake terrified sleeping residents, many of whom still remember the catastrophic 1985 earthquake that killed thousands and devastated large parts of the city.

Families were jerked awake by the grating howl of the capital's seismic alarm. Some shouted as they dashed out of rocking apartment buildings. Even the iconic Angel of Independence Monument swayed as the quake's waves rolled through the city's soft soil.

Elsewhere, the extent of destruction was still emerging. Hundreds of buildings collapsed or were damaged, power was cut at least briefly to more than 1.8 million people and authorities closed schools Friday in at least 11 states to check them for safety.

The Interior Department reported that 428 homes were destroyed and 1,700 were damaged in various cities and towns in Chiapas.

"Homes made of clay tiles and wood collapsed," said Nataniel Hernandez, a human rights worker living in Tonala, Chiapas, who warned that inclement weather threatened to bring more down.

"Right now it is raining very hard in Tonala, and with the rains it gets much more complicated because the homes were left very weak, with cracks," Hernandez said by phone.

The earthquake's impact was blunted somewhat by the fact that it was centered 100 miles offshore. It hit off Chiapas' Pacific coast, near the Guatemalan border, with a magnitude of 8.1 - equal to Mexico's strongest quake of the past century. It was slightly stronger than the 1985 quake, the U.S. Geological Survey said.

The epicenter was in a seismic hotspot in the Pacific where one tectonic plate dives under another. These subduction zones are responsible for producing some of the biggest quakes in history, including the 2011 Fukushima disaster and the 2004 Sumatra quake that spawned a deadly tsunami.

"There is damage to hospitals that have lost energy," he said. "Homes, schools and hospitals have been damaged."

In Tabasco, one child died when a wall collapsed, and an infant died in a children's hospital when the facility lost electricity, cutting off the ventilator, Gov. Arturo Nunez said.

The quake triggered tsunami warnings and some tall waves, but there was no major damage from the sea. Authorities briefly evacuated a few residents of coastal Tonala and Puerto Madero because of the warning.

The Pacific Tsunami Warning Center reported waves of 3.3 feet (1 meter) above the tide level off Salina Cruz, Mexico. Smaller tsunami waves were observed on the coast or measured by ocean gauges elsewhere.

The quake occurred near the point of collision between three tectonic plates, the Cocos, the Caribbean and the North American.

The area has seen at least six other quakes of magnitude 7.0 or greater since 1900. Three of those occurred within a nerve-wracking nine-month span in 1902-1903, according to Mexico's National Seismological Service.

Scientists were still reviewing data, but a preliminary analysis indicated the quake was triggered by the sudden breaking or bending of the Cocos plate, which dives beneath Mexico. That type of process does not happen often in subduction zones. Usually, big quakes in subduction zones occur along the boundary between the sinking slab and the overriding crust.

"It's unusual, but it's not unheard of," said seismologist Susan Hough of the USGS, describing how stresses on the seafloor can produce big earthquakes.