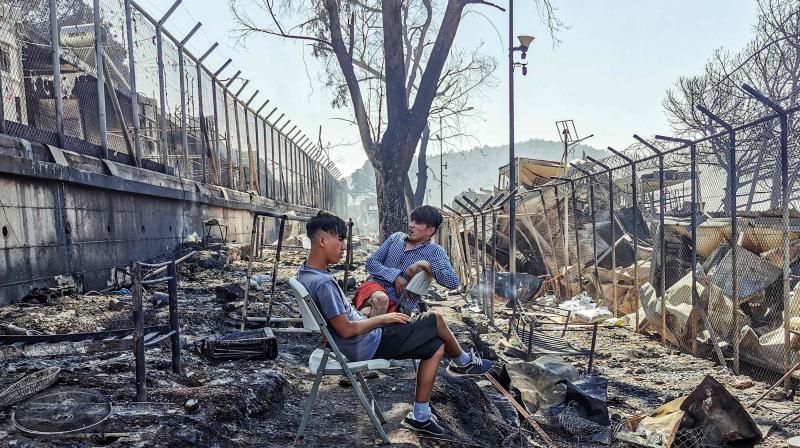 Migrants sit inside the burnt Moria Camp on the Greek island of Lesbos on September 9, 2020, after a major fire. - Thousands of asylum seekers on the Greek island of Lesbos fled for their lives early September 9, as a huge fire ripped through the camp of Moria, the country's largest and most notorious migrant facility. Over 12,000 men, women and children ran in panic out of containers and tents and into adjoining olive groves and fields as the fire destroyed most of the overcrowded, squalid camp. The blaze started just hours after the migration ministry said that 35 people had tested positive at the camp. (AFP)

Lesbos Island: Thousands of asylum seekers on the Greek island of Lesbos fled for their lives Wednesday as a huge fire ripped through the camp of Moria, the country's largest and most notorious migrant facility.

Over 12,000 men, women and children ran in panic out of containers and tents and into adjoining olive groves and fields as the fire destroyed most of the overcrowded, squalid camp.

The blaze started just hours after the migration ministry said that 35 people had tested positive at the camp.

Firemen said Moria had been mostly destroyed but there were no known casualties so far, although a number of people were suffering minor respiratory problems from exposure to smoke.

Black smoke was still belching out of the camp hours after the fire started late on Tuesday, television footage showed.

Government spokesman Stelios Petsas said an emergency would be declared across the entire island and that reports of arson were under investigation.

Additional riot police were rushed to Lesbos on Wednesday, and a cabinet meeting will be held later to address the emergency, the government said.

Petsas warned that authorities faced a "titanic" effort to shelter asylum seekers rendered homeless by the blaze, as well as track down and isolate dozens of confirmed coronavirus infections among them.

Greek news agency ANA said the fires had started after a revolt by asylum seekers who were to be placed in isolation after testing positive for coronavirus or coming into close contact with an infected patient.

Moria had already been placed in quarantine until September 15, with only security personnel granted access after temperature tests.

"There are 35 positive cases and they need to be isolated... to prevent an outbreak among the local population," Petsas told state television station ERT.

Hundreds of asylum seekers attempted to flee on foot towards the port town of Mytilene but were blocked by police vehicles, while others took shelter in the hills surrounding the camps.

Unable to pass, scores bedded down and slept on the ground.

All of Moria's former residents are now banned from leaving the island, Petsas said.

Refugee support group Stand by Me Lesvos said on Twitter it had received reports that Greek locals on the island had blocked fleeing asylum seekers from heading into a nearby village.

"The whole camp is on fire. Everything is burning. People are escaping. Their homes in Moria are gone," the organisation said.

A force of over 20 firefighters, 10 fire engines and a helicopter has been deployed to the scene.

Administration offices, a clinic inside the camp and thousands of tents and were damaged by the fire, according to local news site Lesvospost.

Firefighters also said they had been blocked from entering the camp to battle the blaze by a group of refugees and had asked for police assistance.

The camp had reported its first coronavirus case last Wednesday.

Migrant camps on the islands have endured months of lockdowns as a result of the coronavirus pandemic, with access severely restricted.

But at Moria, the restrictions have been harder to enforce because of the large number of asylum seekers sleeping outside the camp's walls.

Rights groups including the UN refugee agency have repeatedly urged Greece to reduce congestion in its migrant camps.

The Moria camp, which was built to hold fewer than 2,800 people, had been routinely criticised for its lack of hygiene and overcrowding.

Violence outbreaks in Moria and other island camps are common.

Prostitution, sexual assault, disappearances of minors, drug trafficking and fights occurred almost daily in the camp, where dozens of people have been stabbed, burnt to death in their tents or have committed suicide.

From January to the end of August, five people were stabbed in more than 15 attacks.

The government has in recent months moved thousands of refugees from Lesbos and other islands to the mainland.

But many refugees have been unable to find lodgings and jobs after leaving the camps, with housing and cash benefits recently scaled back by the government.

The government has also for months been attempting to build a new camp on Lesbos to replace Moria.

But Lesbos locals have resisted the move, clashing with riot police earlier this year to prevent construction from going ahead.