Johnson's visit to temple comes ahead of UK's crucial General Election on Thursday where he is seeking re-election. 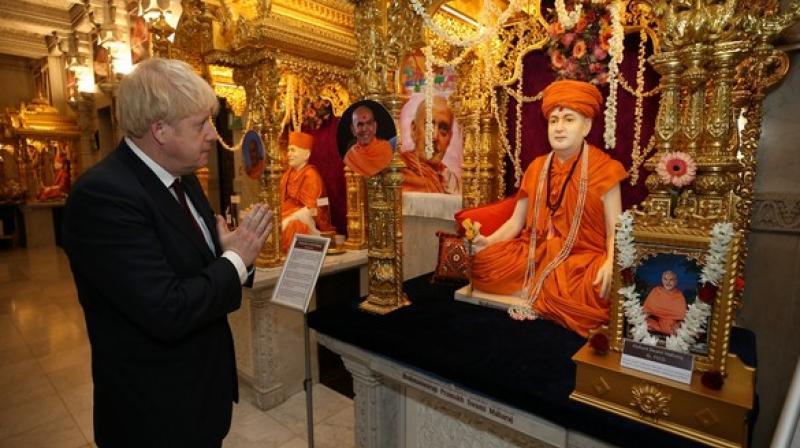 During his visit, Johnson met several leaders of other Hindu organisations and members of the Hindu community, according to temple authorities. (Photo: ANI)

London: British Prime Minister Boris Johnson on Saturday visited the Swaminarayan Mandir in Neasden here and pledged to extend his support to Prime Minister Narendra Modi in his mission to build a new India.

Johnson's visit to temple comes ahead of UK's crucial General Election on Thursday where he is seeking re-election.

During his visit, Johnson met several leaders of other Hindu organisations and members of the Hindu community, according to temple authorities.

Johnson termed his relationship with Prime Minister Modi "great" and expressed his wish to visit India if he is re-elected.

He was accompanied by the British Home Secretary, Priti Patel, and his partner, Carrie Symonds. Along with Priti, Symonds was seen donning bright pink saree during the temple visit.

Along his tour, Johnson met young and old volunteers of the BAPS Swaminarayan Sanstha and learned about the Mandir's multifarious activities to serve families, children, the elderly and the wider community.

Johnson addressed the congregation and said "I know Prime Minister Modi is building a new India. And we in the UK government will support him fully in his endeavour."

"I have a great relationship with Narendra bhai. We had a good discussion during the G7 summit. I want to visit India if I get re-elected with working majority in the earliest opportunity next year," he added.

In an indirect reference to anti-India stance of the Labour party over the issue of Kashmir, he noted: "There can be no place for racism or anti-India sentiment of any kind in this country".

Talking about the temple, Johnson said, "This temple is one of the greatest gifts to our country. But it is more than just a building. It is brought to life by the amazing community spirit that inhabits it. You are giving back to our society through the great charitable work that you do. Thank you for everything that you do for this country. London and the UK are lucky to have you."