The Carolina Reaper is a cross between Sweet Habanero and Naga Viper chillies and is known to be the hottest pepper on Earth. 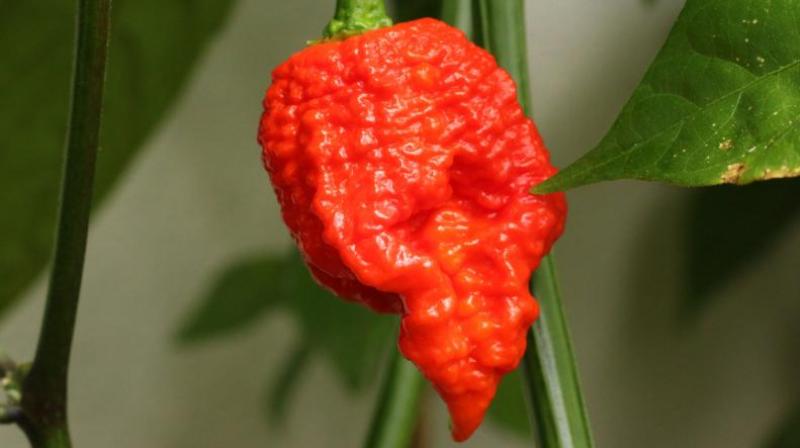 The 34-year-old man's symptoms began with dry heaves immediately after participation in a hot pepper contest where he ate one Carolina Reaper. (Photo: Wikimedia)

Paris: Doctors issued a chilli warning on Tuesday after an American man who ate the world's hottest pepper was struck by excruciating "thunderclap" headaches.

The 34-year-old man's symptoms began with dry heaves "immediately after participation in a hot pepper contest where he ate one Carolina Reaper," in 2016, said an article published in medical journal BMJ Case Reports.

The man then developed intense neck and head pain, and for several days experienced brief but intense "thunderclap" headaches. Each lasted several seconds.

In the end, doctors diagnosed him with a temporary brain condition called "reversible cerebral vasoconstriction syndrome" (RCVS), characterised by the temporary narrowing of blood vessels to the brain.

It was the first reported case of a patient being diagnosed with RCVS after eating a chilli pepper, the authors said.

Often accompanied by "thunderclap" headaches, the condition usually occurs as a reaction to certain prescription medications, or after taking illegal drugs.

"It was a big surprise to everyone," said doctor Kulothungan Gunasekaran of the Henry Ford Hospital in Detroit, one of the authors of the article that warns of the dangers of playing with chilli fire.

The man's symptoms cleared up by themselves and a follow-up CT scan five weeks after the event showed that his arteries had returned to their normal width.

"We would recommend the general public be cautious when eating chilli peppers and to seek medical attention straight away if you develop symptoms like this," Gunasekaran warned.

For those who dare, the Carolina Reaper has a fruity, sweet taste with a hint of cinnamon and chocolate undertones, as well as being extremely hot, according to the website of Guinness World Records.

Last year it named the Carolina Reaper -- a cross between Sweet Habanero and Naga Viper chillies -- as the hottest pepper on Earth. It is grown by a producer in South Carolina.

It rates at an average of 1,641,183 Scoville Heat Units (SHU), according to tests conducted by Winthrop University in South Carolina in 2017.

A Jalapeno can score anything between 2,500 to 8,000 SHU on the scale, Guinness World Records said.

In November 2016, a new record of 120 grammes (just over four ounces) of Carolina Reaper were eaten in one minute at a competition in Arizona.