Johnson was the first world leader to be hospitalised with coronavirus, forcing him to hand control of the economy to foreign minister 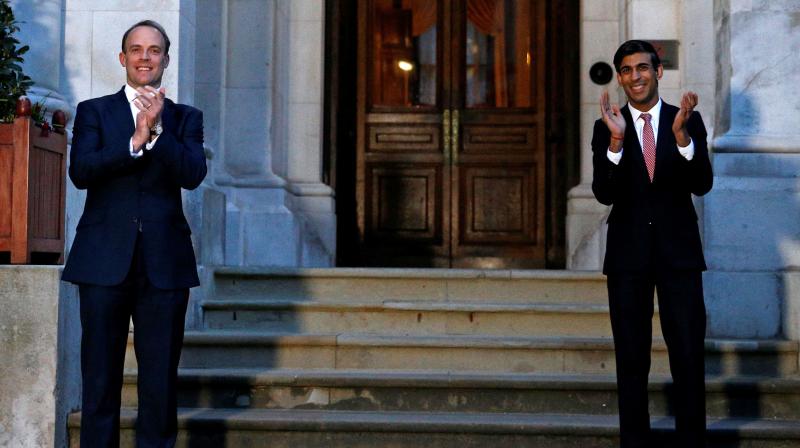 Britain's Foreign Secretary Dominic Raab and Britain's Chancellor of the Exchequer Rishi Sunak take part in a national "clap for carers" to show thanks for the work of Britain's National Health Service (NHS) workers and frontline medical staff around the country as they battle with the novel coronavirus pandemic, outside the Foreign Office in London. AFP photo

London: Prime Minister Boris Johnson left intensive care on Thursday evening as he continues to recover from COVID-19, but he remains under close observation in hospital, his office said on Thursday.

Johnson, 55, was admitted to St Thomas’ Hospital on Sunday evening with a persistent high temperature and cough, and was rushed to intensive care on Monday where he spent three nights receiving treatment.

“The prime minister has been moved this evening from intensive care back to the ward, where he will receive close monitoring during the early phase of his recovery,” a spokesman from his office said in an emailed statement.

“He is in extremely good spirits.”

Johnson was the first world leader to be hospitalised with the coronavirus, forcing him to hand control of the world’s fifth-largest economy to foreign minister Dominic Raab just as Britain’s outbreak approaches its most deadly peak.

Raab tweeted that the improvement in Johnson’s condition was “the news we all wanted to hear”. U.S. President Donald Trump described it as “great news”.

Johnson’s ongoing recovery prompted a small rise in the value of sterling against the dollar.

However, the government statement did not give any details on when Johnson may be able to resume leadership, and Raab - speaking before the latest announcement - had stressed the importance of allowing the prime minister to focus on recovery.

No further updates on Johnson’s health were expected on Thursday.

Raab is deputising for Johnson during the most stringent shutdown in Britain’s peacetime history.

Earlier he told a news conference it was too early to end the lockdown because Britain had not reached the peak of the outbreak yet.

The UK death toll in hospitals from coronavirus now stands at 7,978, a rise of 881 on the day but a smaller increase than the 938 seen in Wednesday’s data.