World   Europe  10 Sep 2019  ‘Not so easy’ for Pakistan to find rally support for Kashmir appeal at Geneva
World, Europe

India has clearly described administration of J&K an internal matter, said Pakistan has no locus standi in it. 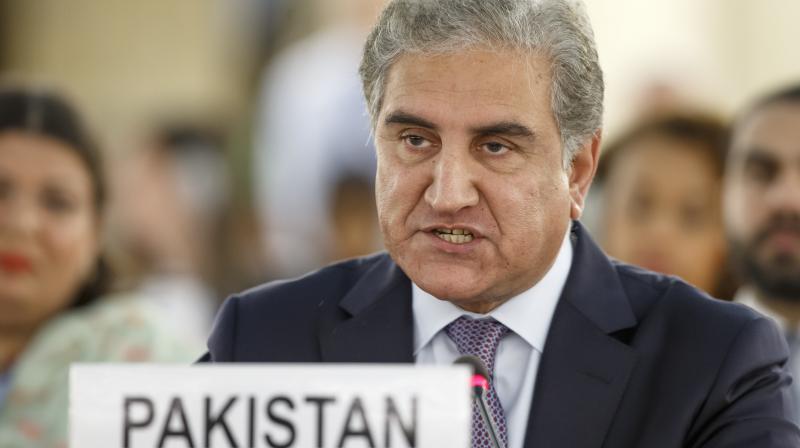 Foreign minister Shah Mahmood Qureshi outlined Pakistan’s strong position while speaking at the UNHRC session in Geneva against the backdrop of tensions with India over the revocation of Jammu and Kashmir’s special status on August 5. (Photo: AP)

Geneva: Pakistan Foreign Minister Shah Mahmood Qureshi landed in Geneva on Tuesday to front his country’s deplorable campaign against India’s move of abrogating Article 370 in Jammu and Kashmir and impose certain communication restrictions in the state at the ongoing session of the UN Human Rights Council. Pakistan wants the UN body to either agree to an “urgent debate” or pass a resolution on the human rights situation in Kashmir that mirrors its perception and agenda.

But as the world body on human rights gets down to business, the Indian assessment is that Qureshi and Pakistan might have to lower the bar on what they can sell to its domestic audience as a victory. India has clearly described that the changes in the political administration of Jammu and Kashmir as an internal matter and said Pakistan has no locus standi in it.

“Because it is not going to be easy to either get the 47-member UN body to agree to either a debate or a resolution on Jammu and Kashmir,” a person familiar with the development told Hindustan Times. According to the procedure laid down by the top UN body on human rights, Pakistan will need a majority support in the 47-member body to even get the council to take up the debate or resolution.

Foreign minister Shah Mahmood Qureshi outlined Pakistan’s strong position while speaking at the UNHRC session in Geneva against the backdrop of tensions with India over the revocation of Jammu and Kashmir’s special status on August 5.

Describing the situation in Jammu and Kashmir as a “looming catastrophe”, Qureshi said the UNHRC should ensure that New Delhi stop the use of pellet guns by Indian security forces, ends the “curfew” and restores fundamental rights and liberties, releases political prisoners and ends the “bloodshed” in the region. He also called for human rights organisations and international media to be give unhindered access to Jammu and Kashmir.

He said he had brought the “plea and petition” of the Kashmiri people, “whose inalienable rights are being trampled by India”, to the UNHRC and claimed they were “caged by an illegal military occupation”. He also claimed India had deployed a million troops in the region, reported Hindustan Times.

Qureshi contended Jammu and Kashmir had become the “largest prison on this planet” and that shops were running short of supplies and hospitals of medicines. He also asserted that the political leadership in the state who have been detained and put under house arrest ever since the change was put into place, were arrested without any due process of law.

He said the “root of the mayhem” is India’s refusal to grant the people of Jammu and Kashmir the right to self-determination and the situation in the region should be a matter of “direct international concern”.

Qureshi further alleged that India could resort to a “false flag operation”, the “bogey of terrorism” or “even attack Pakistan” to divert international attention from the situation in Kashmir.

India has sent a delegation headed by a secretary from the external affairs ministry that is expected to make a statement on behalf of the country and also exercise the “right of reply” to respond to Qureshi’s remarks.

For now, the Indian assessment is that Pakistan will not formally push for either the debate or the resolution unless it is fairly confident that it can get the support of a majority.

Pakistan’s two previous efforts to embarrass India at the UN Security Council and during PM Imran Khan’s efforts had ended disastrously with only 14:1 vote at the closed door meet. Back home in Pakistan, Khan had projected the move to get the UN security council’s closed door discussion as a diplomatic victory.

India has drawn a detailed Plan of Action to counter Pakistan on the Kashmir issue at the United Nations Human Rights Council session from September 9-13 in Geneva. India, will have a secretary level official leading the delegation and would be assisted by India's ambassador to the United Nations, Rajiv Kumar Chander and Ajay Bisaria, who was the Indian envoy to Pakistan.

Pakistan’s foreign minister Shah Mehmood Qureshi will be heading the delegation and he tweeted that Islamabad would “speak definitively” at the 42nd session on the alleged “atrocities in Kashmir”.

On Monday, UN high commissioner for human rights Michelle Bachelet, in her opening address appealed to India to “ease the current lockdown” in Jammu and Kashmir”. She said her office was receiving reports on the human rights situation on both sides of the Line of Control and she was “deeply concerned about the impact of recent actions by the Government of India on the human rights of Kashmiris, including restrictions on internet communications and peaceful assembly, and the detention of local political leaders and activists”.

Her remarks were welcomed by Qureshi and Pakistan Prime Minister Imran Khan, who called on the UNHRC to set up an independent investigation commission to probe alleged rights abuses.