US Kerry said the regime's ‘indiscriminate bombing’ of Aleppo amounted to ‘war crimes’. 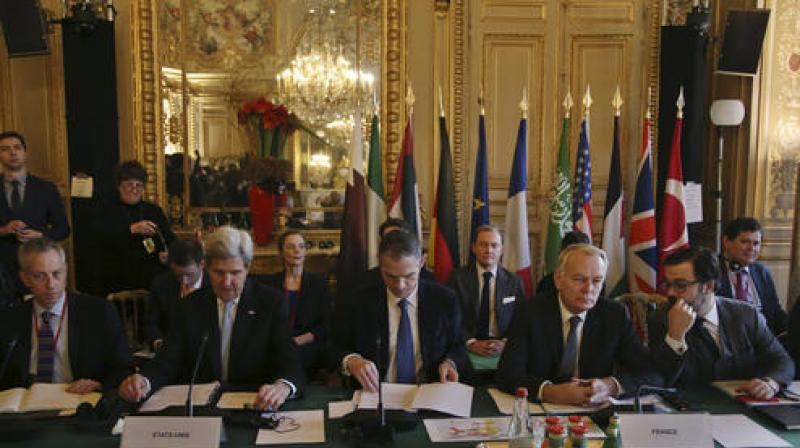 Paris: Western powers called Saturday for talks between the Syrian regime and the opposition in a bid to end a war that has cost more than 300,000 lives but desperation hung over a meeting in Paris.

With Bashar al-Assad's forces pursuing an onslaught on rebel-held areas of Aleppo assisted by Russian air power, the West's powerlessness was evident as leading powers and Gulf states gathered for discussions with the opposition.

US Secretary of State John Kerry said the meeting was "an effort to try to do more than wring our hands and express frustration".

Kerry said the regime's "indiscriminate bombing" of Aleppo amounted to "war crimes" and "crimes against humanity" and he called for Russia and Assad's other backers Iran to show "a little grace" and help end it.

"We need to tie down the conditions for a genuine political transition, and negotiations must resume on a clear basis within the framework of the UN resolution 2254," he said.

That resolution sets out a roadmap for ending the war.

Ayrault said the opposition offered to participate in negotiations without conditions. But a diplomatic source told AFP the opposition required a political transition in Syria before it would agree to take part.

When the two sides staged fruitless talks in Geneva in April the subject of a transition -- and Assad's fate -- was not even among the issues discussed.

No peace in sight

Ayrault said that even if Assad's forces regained control of Aleppo, many other areas of Syria would still be in the hands of rebels or jihadist groups and the fighting would rage on.

"What sort of peace is it if it's only the peace of cemeteries?" he asked.

His British counterpart Boris Johnson had the same message for Assad.

"There can be no military solution in Syria," Johnson said. "We must keep pushing for a return to a political process with the credibility necessary for all parties to commit to an end to all the fighting."

German Foreign Minister Frank-Walter Steinmeier said the international community was stunned by the extent of the suffering in Aleppo.

"We have no words to describe what happens in Aleppo every day," he said.

He urged the regime and its military backers to allow civilians to leave the shattered city.

"We demand that the regime, but also Iran and Russia, let people leave the conflict zone," Steinmeier said.

US and Russian officials will meet in Geneva on Sunday for what Kerry called discussions to "to save the lives... of people innocently caught up" in the fighting.

But Kerry admitted his expectations of those talks were "very constrained".

Aleppo was once Syria's most important industrial and commercial city but has seen some of the most brutal violence of the war.

In less than a month, forces loyal to Assad have overrun around 85 percent of east Aleppo, which had been a rebel stronghold since 2012.