Horrifying that Pak will use N-weapons to protect terrorists

A researcher at European Foundation says Pakistan's will to use nuclear weapons to protect terrorists should horrify all of humanity. 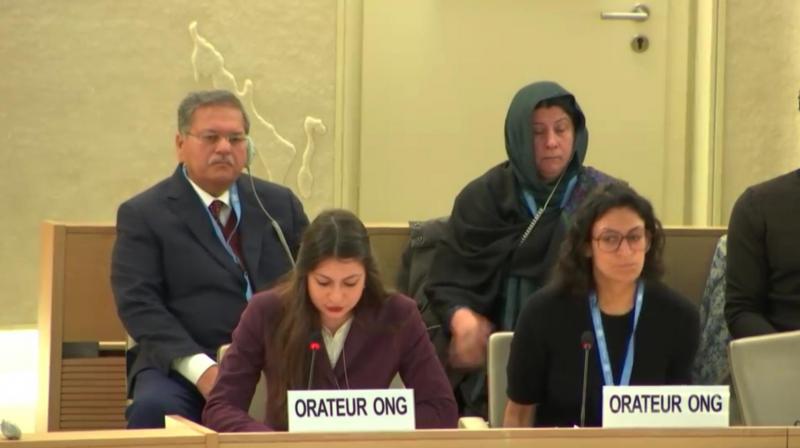 She told the UN body that Pakistan continues to use terrorist outfits to engage in proxy warfare against its neighbours. (Photo:ANI)

Geneva: In an attempt to protect terrorists on its soil, Pakistan is willing to bring the world to the brink of war and even resort to the use of nuclear weapons, which should "horrify all of us", a researcher at an Amsterdam-based foundation told the United Nations Human Rights Council (UNHRC) on Monday.

Yoana Barakova, the researcher at the European Foundation for South Asian Studies (EFSAS), underlined that Pakistan "unscrupulously exports terrorism" and continues to use terror outfits to engage in proxy war against its neighbours, implying India and Afghanistan.

Intervening during the 40th Session of the UN Human Rights Council here, Barakova referred to the ghastly February 14 terror attack on a CRPF convoy in Pulwama district of Jammu and Kashmir and the Pakistani aerial bombing in Jammu and Kashmir on February 27, a day after Indian air strike at terror camp in Balakot.

Noting that the Pulwama terror attack, in which 40 CRPF personnel were killed, was perpetrated by Pakistan-based Jaish-e-Mohammad (JeM) outfit, she said the subsequent action (of aerial bombing) by Pakistan "unveils an ugly truth, (that) the country is willing to bring the world to bring of war and threaten to use its nuclear arsenal, just in order to defend its terrorists."

She went on to add, "The sheer thought of such utterly reckless behaviour should horrify all of us."

She told the UN body that Pakistan continues to use terrorist outfits to engage in proxy warfare against its neighbours.

"The UN Security Council’s consolidated list of terrorist individuals and entities includes 139 entries from Pakistan. Jaish-e-Mohammed, Lashkar-e-Taiba, Haqqani Network and Jamaat-ud-Dawa – are all based in Pakistan and believed to be receiving State protection," the European researcher said, slamming Pakistan.

She referred to a recent interview of Pakistan Foreign Minister Shah Mehmood Qureshi with BBC in which he accepted that the Government of Pakistan is in contact with Jaish-e-Mohammed, exposing the country’s duplicitous rhetoric vis-à-vis terrorism.

"While Pakistan continues to unscrupulously export terrorism and is the only country in this world which is willing to use nuclear weapons in order to protect its terrorists, it also remains a member state of this (UNHR) Council. Surely, a matter that warrants contemplation," she added.

It has also shared dossiers with Pakistan about links to the terror attack in that country but Pakistan continues to be in a denial mode.

India has also mounted intensified campaign globally to ensure that the world community pushes Pakistan to dismantle the terror infrastructure and end support to terrorists.