Many TV viewers took to social media soon after to express outrage. 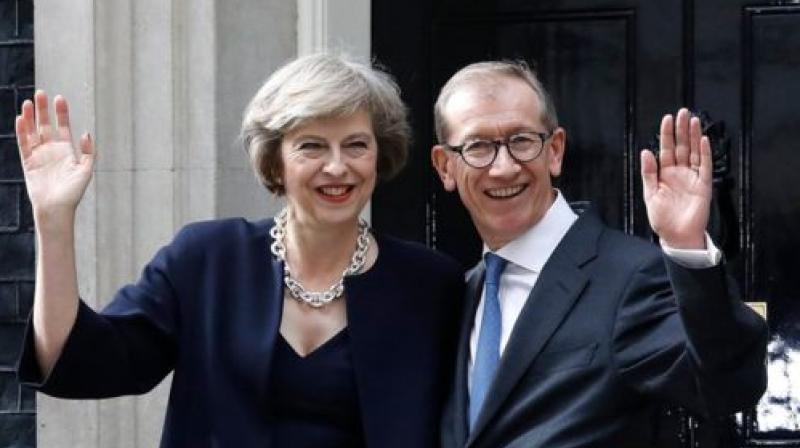 Philip May and UK Prime Minister Theresa May. (Photo: AP)

London: UK Prime Minister Theresa May faced flak for making what has been labelled as a "sexist" remark by social media users during a television interview in which she said her husband handled "traditional boy jobs" at home.

In her first television interview alongside husband Philip May on Wednesday, 60-year-old Theresa May light-heartedly told the BBC that "there's boy jobs and girls jobs."

But many TV viewers took to social media soon after to express outrage.

Asked by the host if his wife was a tough negotiator, Mr Philip, 59, said, "Well, there's give and take in every marriage. I get to decide when I take the bins out. Not if I take them out." Theresa jumped in and said, "There's boy jobs and girls jobs, you see."

"I definitely do the bins. I do the traditional boy jobs, by and large," her husband added.

A Twitter user said, "Can someone please tell Theresa May, it's 2017."

Another tweeted, "Sexism at it's finest. Should the woman running our country be more supportive of gender equality?" The couple, who were introduced at Oxford University during a student disco by mutual friend Benazir Bhutto - the future Pakistan Prime Minister - appeared together for the first time on the more informal 'The One Show' as part of the general election campaign.

Asked about his first impressions of the woman who would become his wife, Mr Philip said, "What a lovely girl. And she still is."

When asked whether he "fancied her instantly", he replied, "Absolutely, it was love at first sight."

PM May's investment banker husband also said that his wife had first harboured an interest in leading the country when she was in the Shadow Cabinet, which she had joined in 1999.

Speaking about the problems of "fake news", Theresa May revealed a difficult moment years ago for the couple, who don't have children, when a newspaper predicted she'd have trouble being selected as a Conservative Party candidate because of her new baby.

She said her mother-in-law had rung up hoping there was happy news. "So I was disappointed," the PM said.

Asked about the downside to being married to Theresa May, Mr Philip insisted it was a privilege, adding, "If you're the kind of man who expects his tea to be on the table at six o'clock every evening, you could be a disappointed man," he said.