Bare-chested women lock themselves to UK parliament in climate protest

On Saturday, protesters blockaded distribution of two newspapers they accuses of failing to accurately report on climate issues 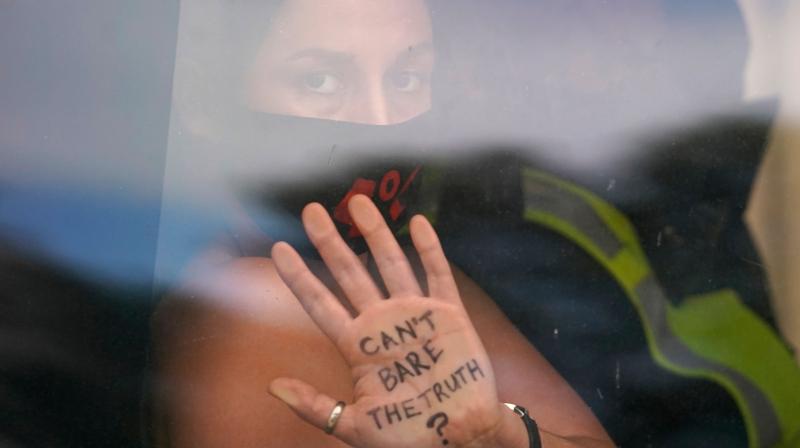 An activist from the Extinction Rebellion climate change group shows a message written on her hand as she is taken away in a police van after being arrested for locking herself to railings outside UK's parliament in central London on September 10, 2020 on the final day of their new series of 'mass rebellions'. - Climate change protesters have put on 10 days of demonstrations, held across the country by activist group Extinction Rebellion. (AFP)

London: Thirty bare-chested women locked themselves to the railings outside Britain’s Houses of Parliament on Thursday in an Extinction Rebellion protest to demand action against climate change.

The women carried a large banner reading “Can’t bare the truth?” and had words painted on their chests representing predicted consequences of global warming such as war, drought, starvation, wildfires, violence and famine.

Some of the women used metal D-locks normally used to lock up bicycles to attach themselves by the neck to the parliamentary estate’s railings.

The women called on the government to inform the public about the risks of allowing average global temperatures to rise by 4 degrees centigrade, which Extinction Rebellion says is what will happen by 2100 unless countries take action now.

The activist group restarted its protests in Britain last week following a long lull due to the coronavirus pandemic. On Saturday, Extinction Rebellion protesters blockaded two printworks to disrupt the distribution of newspapers the group accuses of failing to accurately report on climate issues.

“I refuse point-blank to allow that kind of anarchy on our streets,” she said of the printworks protest.