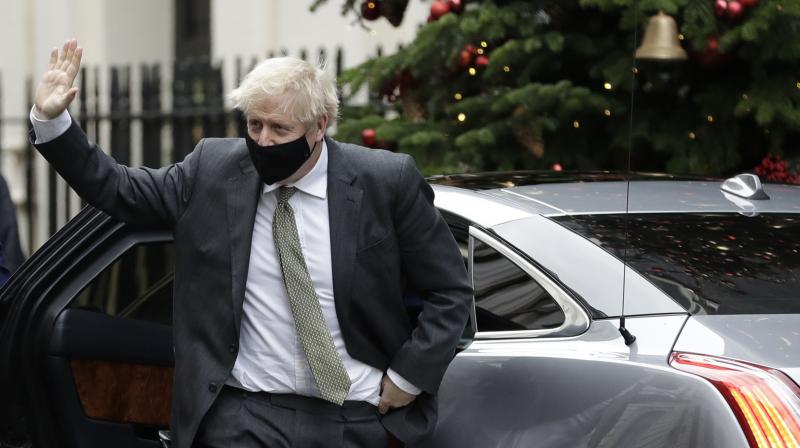 Britain's Prime Minister Boris Johnson waves at the media as he arrives back in Downing Street after attending the weekly Prime Ministers' Questions session at the Houses of Parliament in London on Wednesday, December 9, 2020. (AP/Matt Dunham)

London: The UK Foreign Office is closely following the protests by farmers in India, a government spokesperson said on Thursday as it clarified that Prime Minister Boris Johnson had clearly misheard a question in Parliament when he responded with Britain's stance on the India-Pakistan dispute instead.

The gaffe occurred during the weekly Prime Minister's Questions (PMQs) session in the House of Commons on Wednesday, when Johnson reiterated that any dispute between India and Pakistan was for the two countries to settle bilaterally in response to a question by Opposition Labour MP Tanmanjeet Singh Dhesi about conveying British Sikh anxieties over the ongoing protests against agricultural reforms in India.

A UK government spokesperson said: The Prime Minister clearly misheard the question in Parliament. The Foreign Office are following the issue of protests in India closely.

Dhesi, who has been very vocal on the protests by farmers against India's agricultural reforms, had raised the issue of the footage of water cannons, teargas and brute force being used against the peaceful protesters.

So, will the Prime Minister (Johnson) convey to the Indian Prime Minister (Narendra Modi) our heartfelt anxieties, our hopes for a speedy resolution to the current deadlock and does he agree that everyone has a fundamental right to peaceful protest, he questioned Johnson.

The British Prime Minister, in his brief response, seemed to be addressing the Kashmir dispute instead.

Our view is that of course we have serious concerns about what is happening between India and Pakistan but these are pre-eminently matters for those two governments to settle and I know that he appreciates that point, said Johnson.

A perplexed Dhesi took to social media immediately to brand Johnson as absolutely clueless and was joined by scores of fellow Labour politicians and others in expressing shock at the gaffe.

The incompetence from this government continues. The foreign secretary Dominic Raab has failed to brief the PM on one of the largest protests the world has seen, said fellow British Sikh Labour MP Preet Kaur Gill.

It would seem our Prime Minister (and former Foreign Secretary) doesn't know the difference between Punjab and Kashmir. Why are we not surprised, added Emily Thornberry, Labour MP and former shadow foreign secretary.

The Foreign, Commonwealth and Development Office (FCDO) has refused to be drawn into British politicians' representations seeking UK government intervention in the matter, stating that the police handling of protests are a matter for the government of India.

Thousands of farmers are currently staying put at Delhi's borders with Haryana and Uttar Pradesh in protest against the Farmers' Produce Trade and Commerce (Promotion and Facilitation) Act, 2020, the Farmers (Empowerment and Protection) Agreement on Price Assurance and Farm Services Act, 2020 and the Essential Commodities (Amendment) Act, 2020.

They have expressed apprehension that these laws would pave the way for the dismantling of the minimum support price system, leaving them at the “mercy” of big corporations.

However, the government has maintained that the new laws will bring farmers better opportunities and usher in new technologies in agriculture.

There have been multiple rounds of talks between representatives of the protestors and the government but the logjam continues.