World   Europe  12 May 2017  Crime a major issue for German parites ahead of key vote
World, Europe

Crime a major issue for German parites ahead of key vote 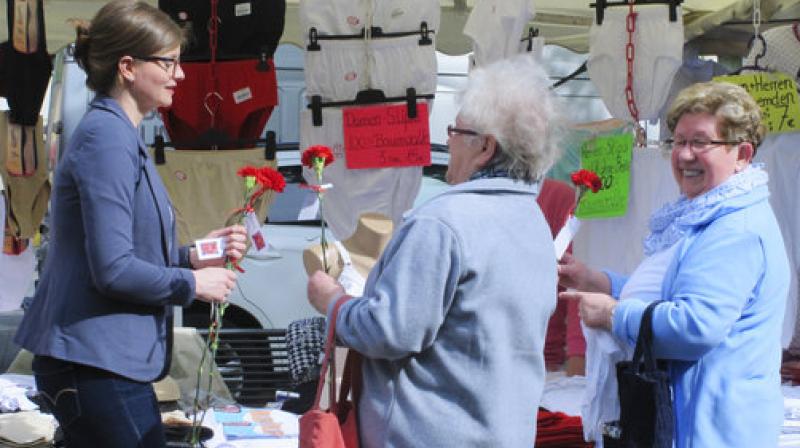 Duisburg: Sarah Philipp is handing out red carnations to women browsing the lingerie stall at a quiet street market in Duisburg, adding a bright dash of color to the otherwise gray surroundings.

The 34-year-old is hoping to defend her seat at Sunday's election for the regional assembly of Germany's westernmost state, which includes Bissingheim, an area built for railways workers serving the mighty steel and coal industry that once dominated the city.

The vote is a final test of the country's political mood before a general election in September and many of the issues on voters' minds in North Rhine-Westphalia are mirrored at the national level.

Recently released figures on crime showing a sharp rise in violent offenses by migrants have propelled the topic to the forefront again, with nationalist parties seeking to capitalize on voters' fears.

Philipp, whose Social Democratic Party has governed North Rhine-Westphalia for the past seven years, sharing power with Chancellor Angela Merkel's center-right Christian Democrats since 2013, is defensive when the topic comes up.

"People tell us they feel less safe, but this isn't borne out by statistics," she says. At the same time, Philipp acknowledges that voters' fears need to be taken seriously: "You can't ignore the fact that safety is a very emotional issue."

Although Germany remains one of the safest countries in the world, a number of violent incidents have stoked angst about crime. Some of the most prominent cases have involved foreigners who had recently come to Germany as asylum-seekers.

Official figures show that while overall crime decreased slightly from 2015 to 2016, violent crime worsened. Non-Germans also accounted for a greater share of criminal suspects last year, with the biggest increase seen in the category of 'Zuwanderer' comprising asylum applicants, people granted temporary permission to remain in the country and those resident illegally.

Zuwanderer make up 2 percent of the population yet accounted for 8.6 percent of all criminal suspects in 2016, up from 5.7 percent the year before.

Easily overlooked in the broad statistics is that many of the violent crimes involved altercations in crowded refugee homes. The recent influx of migrants was also skewed toward teenage boys and young men, a population that experts say is disproportionately responsible for violent crime the world over.

The migrants who stand the greatest chance of being allowed to remain in Germany - Syrians being the biggest-single group were underrepresented in the crime statistics. Young men from North Africa and some sub-Saharan African countries, who are unlikely to get permission to stay, have among the highest crime rates.

One of those was Anis Amri, 24, a Tunisian involved in small-time drug dealing and other petty crime until authorities decided to deport him. Before his paperwork came through, Amri stole a truck and killed 12 people at a Christmas market in Berlin. The Islamic State group later claimed responsibility.

The Berlin truck attack and a series of high-profile sexual assaults attributed to migrants over the past year appeared to support the dire predictions of critics of the government's decision under Merkel to allow in over a million asylum-seekers since 2015.

"Much of the violence we're seeing is due to the asylum and migration policy of Angela Merkel," says Marcus Pretzell, the regional head of Alternative for Germany, a nationalist party that is looking to make North Rhine-Westphalia the 13th state where it has political representatives.

A good result on Sunday would be seen as a sign that the party stands a good chance of entering the Bundestag for the first time in the September 24 national election.

Pretzell's party has been fanning fear of crime and migrants with a poster alluding to the sexual assaults that took place in Cologne, North Rhine-Westphalia's biggest city, on New Year's Eve 2015. Hundreds of women were groped and robbed, mostly by men from North Africa.

The failure by Cologne police to spot and stop the assaults prompted an outcry in Germany at the time. Merkel's party accused the state's left wing government of being lax on crime and branded governor Hannelore Kraft's most loyal aide, responsible for policing, a "security risk."

"There's a general sense of insecurity among voters, especially women, that's playing a role in this campaign," says Ina Scharrenbach, a regional lawmaker for Merkel's party, which currently is part of the opposition in North Rhine-Westphalia's parliament but is polling well.

Scharrenbach was part of the parliamentary inquiry into the New Year's assaults in Cologne. She cites measures the Christian Democrats introduced at the national level to crack down on crime, but denies that 'Merkel's refugees' are the main problem.

Instead, she blames the regional government for neglecting whole districts in large cities - of which this state of 18 million has many. One of those districts, Duisburg-Marxloh, made headlines last month when a 14-year-old boy was stabbed to death in a fight.

"We need to give people in these areas the feeling that the state isn't looking away," Scharrenbach says.

Arnold Plickert, the regional head of Germany's biggest police union GdP, acknowledges that authorities ignored the problems in Marxloh and elsewhere for too long, but says a zero-tolerance policy is now in force.

"For the past year-and-a-half, we have been massively increasing police in these areas," Plickert says. "If someone fails to use their car indicator, listens to loud music or throws a cigarette butt on the ground, the police will ensure that the law is enforced."

But he says police and prosecutors can only solve part of the problem. Integrating migrants is key to turning crime trends around in the medium and long term, he says.

"You have to say whoever comes to Germany needs to follow our rules," says Plickert. "And if they don't, then you draw a line and deport them."

Such tough talk is increasingly heard from all parties in Germany and some migrants too.

"If statistics make clear that crime is linked to migration then we need to look closely at it, but without emotion, empirically, scientifically," says Mohammed Assila.

The Moroccan-born social worker has for years worked to prevent young Muslims from turning to Islamic radicalism and is familiar with all of the debates about immigration and crime.

Assila advocates a dual strategy Offering migrants job training and education, and clearly spelling out the consequences for legal transgressions.

"Repression but also prevention," agrees Philipp, the Social Democrat. "You have to do one, but you can't forget the other."