Mr Modi emerged as the most robust and fervent advocate to fight against international terrorism. 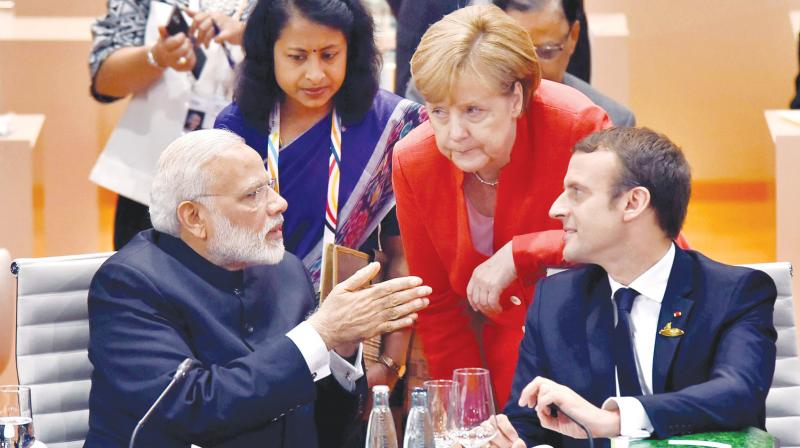 The 12th summit of G-20 accounting for 2/3rd of the world population, 75 per cent global trade and 85 per cent world’s GDP held in Germany’s port city of Hamburg (July 7-8, 2017) has exposed a divided house. The US and Europe found themselves on two opposite sides. The host, German Chancellor Angela Merkel put it pithily, “disagreement has to be made clear. Unfortunately, and I deplore this, the US left the climate agreement.” French President Emmanuel Macron’s comment that “our world has never been so divided” echoed the same sentiment.

Amidst the current acrimony between the US and Europe, three Ms: Merkel, Modi and Macron seemed to have moved to the centrestage as prominent engines of the G-20. Their leadership role, approach and priorities will not only impact the G-20 but will also impact their own political fortunes in their respective countries.

For the first time at the G-20 summit, thanks to Donald Trump’s decision on the Paris Agreement and his protectionist threats, the US found itself reduced to being one against 19. Rebuffing British Prime Minister Theresa May’s suggestion that the US could return to the Paris Agreement, the final joint communiqué declared: “The leaders of other G-20 members state that Paris Agreement is irreversible... we reaffirm our strong commitment to the Paris Agreement, moving swiftly towards its full implementation.” Nonetheless, it accommodated American assurances, “the US states it will endeavour to work closely with other countries to help them access and use fossil fuel more cleanly and efficiently”. Both India and China, big users of coal, shouldn’t be complaining.

On the global trade, another major issue, which separates the US from the approach of other G-20 members, a compromise has been hammered out. While G-20 conceded “the importance of reciprocal and mutually advantageous trade and investment”, it also vowed to fight protectionism, including all unfair trade practices and recognised the role of legitimate trade defence instruments.

Countering Mr Trump’s slogan of “Make America Great Again”, Mr Macron stressed the idea of “Make our planet great again”; it went viral in minutes. To the US chagrin, he invited again the American scientists and researchers unhappy with Mr Trump’s decision to withdraw from the Paris Agreement to come to France and work on climate solutions.

Mr Macron, a 39-year-old, who is fast becoming the poster boy among the world leaders, also debunked Mr Trump’s frequent references to trade imbalances. Giving an example of iPhone, which is designed in the US, assembled in China and sold around the world, he asserted that it is a “profound mistake” to judge benefits of trade through the prism of deficits or surpluses. Notwithstanding this assertion, if the US imposes tariffs and quotas on steel imports, its aftereffects will be felt globally.

Mr Modi emerged as the most robust and fervent advocate to fight against international terrorism. His 11-point agenda resonated with many G-20 leaders and beyond the group his suggestions on identification of terrorist groups, choking of flow of funds and weapons to them, sharing of information about their movements, their expeditious extradition and cooperation on cyber-security can make a huge difference in addressing the global menace of terrorism if followed through seriously.

However, going by the past record, an effective action on the Comprehensive Convention on International Terrorism, deterrent action against nations supporting terrorism, deradicalisation and supply of funds and weapons to terrorist organisations looks very doubtful. Pakistan’s role in sheltering, nurturing, aiding abetting and training terrorists and using terrorism as an instrument of state policy, is an open secret, but no action will be taken against it. Hundreds of mosques in different parts of the world, which have become seminaries of radicalisation, have been receiving funds from Saudi Arabia, still it was the first overseas country visited by President Trump. The sources of flow of funds and weapons to the terrorist groups are also known. China has repeatedly blocked the move to designate Pakistan-based Jaish-e-Mohammed chief Masood Azhar as a global terrorist by the sanctions committee of the United Nations. So Mr Modi’s plea that Lashkar-e-Tayyaba, JeM and Haqqani be equated with the ISIS and Al Qaeda is likely to fall on deaf ears.

Indian premier’s spirited articulation of his government’s endeavours in containing corruption and black money, and vigorous promotion of digitisation, start-up funding and external commercial borrowing by start-ups, labour market reforms, greater female participation in the workforce and ease of doing business has earned him praise from his counterparts. Demonetisation and GST are transforming decisions for India.

Similarly, the finalisation and timely, full and consistent implementation of the agreed G-20 financial sector reform agenda and trying to finalise the Basel III framework without further significantly increasing overall capital requirements across the banking sector, while promoting a level playing field can’t be faulted. But given the overriding domestic political, economic and social considerations and the fact that G-20 lacks the legal authority to enforce its decisions, concrete actions have seldom met the laudable goals.

Though the G-20 remains the premier international forum for economic cooperation, slowly its summits are becoming a productive venue for holding parleys on international flashpoints and reducing tension. Mr Trump and Vladimir Putin’s meeting on the sidelines of Hamburg summit has led to a (temporary) ceasefire in southern Syria.

Mr Trump and Xi Jinping discussed North Korea and Modi-Xi Doklam impasse. If G-20 acquires some political muscles on her formidable economic bones, it can give the UN run for its money: have less chatter and produce more results.

The writer is a former Indian ambassador to Libya