The region itself is deeply divided on the issue, with polls suggesting Catalans are roughly evenly split on whether to go it alone. 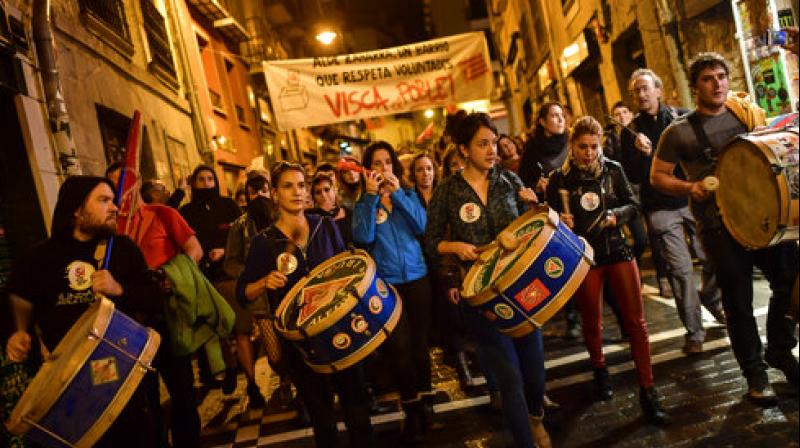 Spanish flags have been tied to balconies and windows around the city by pro-unity supporters on the nationwide holiday. (Photo: AP)

Madrid: Spain marks its national day Thursday with a show of unity by opponents of Catalonian independence, a day after the central government gave the region's separatist leader until next week to clarify whether he intends to push ahead with secession.

The country is in the midst of its worst political crisis in a generation after separatists in the wealthy northeastern region voted in a banned referendum on October 1 to split from Spain.

Prime Minister Mariano Rajoy and King Felipe VI are due to attend a traditional military parade in central Madrid, where Spanish flags have been tied to balconies and windows around the city by pro-unity supporters on the nationwide holiday.

Armed forces will march down Madrid's Paseo de la Castellana boulevard to mark the day that Christopher Columbus first arrived in the Americas in 1492 while a pro-unity rally by members of the far-right is expected in the Catalan capital Barcelona.

Rajoy has vowed to do everything in his power to prevent Catalan secession and his government said Wednesday that it would take control of the region if it insisted on breaking away.

The warning came after Catalonia's president Carles Puigdemont announced Tuesday that he had accepted the mandate for "Catalonia to become an independent state" and signed an independence declaration but asked regional lawmakers to suspend it to allow for dialogue with Madrid.

The legal validity of the declaration was unclear.

After holding an emergency cabinet meeting, Rajoy told lawmakers that Puigdemont had until next Monday to decide if he planned to push ahead with secession and until next Thursday to reconsider, otherwise Madrid would suspend Catalonia's regional autonomy.

The deadline set the clock ticking on Spain's most serious political emergency since its return to democracy four decades ago.

World leaders are watching closely and uncertainty over the fate of the region of 7.5 million people has damaged business confidence, with several listed firms already moving their legal headquarters out of Catalonia.

The region itself is deeply divided on the issue, with polls suggesting Catalans are roughly evenly split on whether to go it alone.

While Puigdemont insists the October 1 referendum gave him a mandate for independence and has said he still wants dialogue with Madrid, Rajoy has refused to negotiate on anything until the separatists abandon their independence drive. He has also rejected calls for mediation.

"There is no mediation possible between democratic law and disobedience, illegality," he told parliament.

Rajoy's triggering on Wednesday of constitutional article 155, which allows Madrid to impose control over its devolved regions, is an unprecedented move that some fear could lead to unrest.

While separatist leaders say 90 percent of voters opted to split from Spain in the unofficial October referendum, less than half of the region's eligible voters actually turned out.

The Catalonian separatist drive has raised concern for stability in a European Union still coming to terms with Britain's shock decision to leave the bloc, and Brussels has urged "full respect of the Spanish constitutional order".

German Foreign Minister Sigmar Gabriel said any unilateral independence move would be "irresponsible" and France said it would not recognise Catalonia's "illegal" bid for statehood.

Catalonia, which accounts for about one-fifth of Spain's economic output, already enjoys significant powers over matters such as education and healthcare.

But Spain's economic strains during the world's financial crisis, coupled with resentment that the region pays more in taxes than it receives in investments and transfers from Madrid, have helped push the cause of secession from the fringes of Catalan politics to centre stage.

Puigdemont insisted Wednesday that "the majority of Catalan people want Catalonia as an independent state" but Rajoy dismissed Puigdemont's push as "a fairytale".

"It is not peaceful, it is not free, it will not be recognised by Europe and now everyone knows it will have costs," he told lawmakers.