During the 18-month long abuse, Mamadou was beaten, tortured and was forced to bury his friends with his own hands. 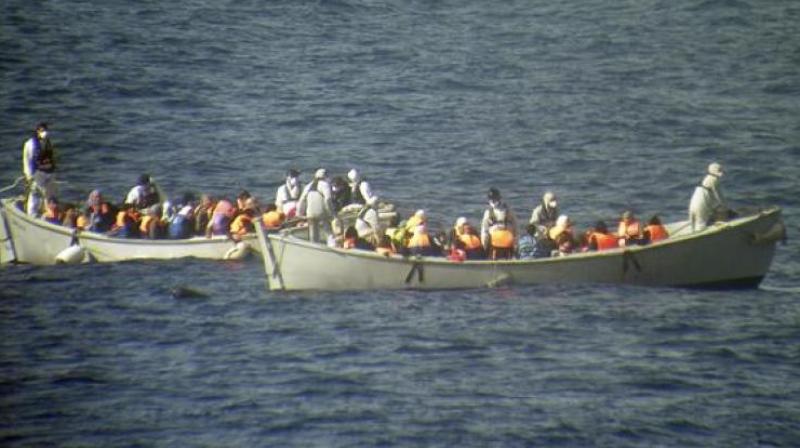 Mamadou’s ordeal came to an end when he was finally rescued when he met a smuggler who put him on a boat from Sabratha into the Mediterranean. (Photo: Representational)

Sicily: 16-year-old Mamadou Yallow’s torment began when he was at his school and police came looking for his family in Gambia. It was a moment of shock for Mamadou when he learnt that his father and brothers had been arrested for allegedly being involved in a coup against President Yahya Jammeh.

“The soldiers are looking for you, if they see you, they will kill you,” Mamadou was told and was forced to flee his hometown.

While leaving his home, Mamadou hoped for a better future. However, things went wrong when he got stuck in a year-and-a-half long nightmare where he had to witness murders, rape, torture, imprisonment and beatings.

Mamadou’s ordeal came to an end when he was finally rescued when he met a smuggler who put him on a boat from Sabratha into the Mediterranean. His boat was rescued by a Spanish ship and taken to Sicily where he received physical as well as mental treatment.

In an interview with the Independent, Mamadou revealed his horrific experience throughout the 18-months he spent with various kinds of people – including the memories of burying his dead friends with his own hands.

As Mamadou started describing his experience, he said that he had fled his home in December 2014.

“They came and arrested everybody in my family while I was at school. There was nothing to do so I escaped to Senegal. I knew if I went back they would kill me and nobody would care,” he said.

Mamadou said that he and his friends took the migration route towards Europe from Mali. He said that he knew nothing about smugglers and the fight between Malian government, rebels and al-Qaeda rebels.

As he reached Malian city of Gao, he and his accomplices were stopped by armed rebels. “They told us to make a long line and to jump, jump like a monkey dance. They took our water, they took our money, they took everything that belonged to us,” Mamadou said recalling the horror.

Mamadou’s experience in Gao was the scariest of all as he saw some of his close friends being beaten to death while others starved to death without food and water.

He also said that his captors would parade them in front of bottled water and tell them to open their mouths. But as soon as they would do so, the captors would throw the water on the ground.

“They said we would die there. They were raping the women in front of us, children, they don’t care,” he added.

After realising that they would not survive if they stayed back in Gao, Mamadou and his friends decided to risk their lives for freedom and escaped from the place. They got onto a lorry that was on its way to Algeria.

They eventually reached Ouargla, a capital city in Sahara Dessert in southern Algeria which is a transit for migrants attempting to reach Europe. Even then things did not rule in Mamadou’s favour and he was forced to move to Libya which was witnessing a civil war tat that time.

“We met an Arab man with a soldier’s uniform, he said he could help us and we would be safe,” said Mamadou. However, he, along with six other migrants, was sold off to a man. He was then forced to work on a farm.

Mamadou said that once he fell sick and was even unable to stand. When his friends were also unable to work on farms, they were threatened by their master saying, “I’ve bought you so you are my slave now. I paid for you so I will kill you.”

Mamadou was forced to bury his friends in the garden after they were brutally shot dead by their master.

Finally one day, Mamadou and three other slaves climbed up the fence and ran away when he met a smuggler who put him on an overcrowded migrant boat that took him to the Italian region of Sicily.

“He’s still there. We hope soon he finds peace,” said an aid worker who treated Mamadou after he was rescued.