Pope Francis to honour two kids who changed the Church

Poor, illiterate shepherd children had visions of the Virgin Mary 100 years ago. 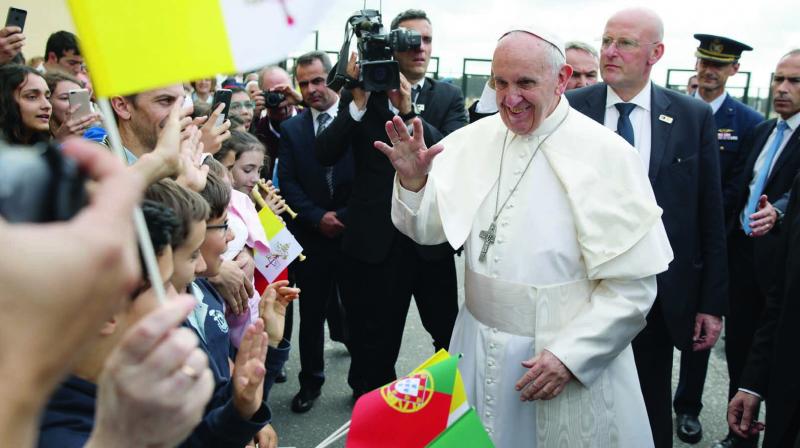 Fatima, Portugal: Pope Francis and pilgrims from around the world are flocking to a Catholic shrine town in Portugal to honour two poor, illiterate shepherd children whose visions of the Virgin Mary 100 years ago marked one of the most important events of the 20th-century Catholic Church.

Francis arrives on Friday to celebrate the centenary of the apparitions and canonise the children. He is hoping the message of peace that they reported 100 years ago, when Europe was in the throes of World War I, would resonate with the Catholic faithful on Friday.

Thousands of pilgrims, waving flags from as far as Venezuela, Argentina and Cuba, braved a steady cold rain as they waited for him, many spending the night outdoors to make sure they had a good spot.

Over the past several days, church groups, families and individuals have made their way to Fatima, about 150km north of Lisbon, some completing the final leg of the pilgrimage on their knees in prayer. Carrying candles, rosaries and roses, they have made their way to the statue dedicated to Our Lady of Fatima or tossed wax body parts ears, hearts, limbs into a huge fire to pray for healing.

“For me it is the second time I am here with a pope, first with John Paul II and now with Papa Francisco,” said pilgrim Elisabete Fradique Conceicao in between rain showers. “They are simple men and that simplicity makes sense when you think what happened here 100 years ago.”

On May 13, 1917, while they were grazing their sheep, the children saw the first of a half-dozen visions of the Virgin Mary. They said she revealed to them three “secrets” apocalyptic messages foreshadowing World War II, hell, the rise and fall of communism and the death of a pope and urged them to pray for peace and turn away from sin.  At first doubted by the local Catholic Church and even their parents, the children’s story gained believers and was eventually accepted as an authentic apparition by the church in 1930. The children being canonised, brother and sister Francisco and Jacinta Marto, who were 9 and 7 at the time of the apparitions, died of influenza two years later. Their cousin, Lucia dos Santos, at 10 the ringleader of the group and who became the main raconteur of their tale, is on track for beatification, the first step toward becoming a saint. Her case couldn’t begin until after her death in 2005.

Francis’ deputy, Cardial Pietro Parolin, said that the importance of Fatima lies specifically in the fact that poor, illiterate children not the wealthy learned or intellectuals were able to convey a powerful message of love and forgiveness at a time of war when “the talk was of hatred, vendetta, hostilities.”

Fatima has long been associated with St John Paul II, given the Polish-born pope credited the Virgin Mary with having saved his life in 1981, when a would-be assassin shot him on Fatima’s feast day May 13 in St Peter’s Square. John Paul made the first of his three pilgrimages to Fatima the following May, and one of the bullets fired at him now adorns the crown of the Madonna at the shrine.

Like John Paul, the Argentinian-born Francis is exceedingly devoted to the Madonna, thanks in large part to the strong role that Marian devotions play in the popular piety of Latin American Catholics.