Blimp organiser Leo Murray said giant balloon designed to speak to Trump 'in a language that he understands, which is personal insults.' 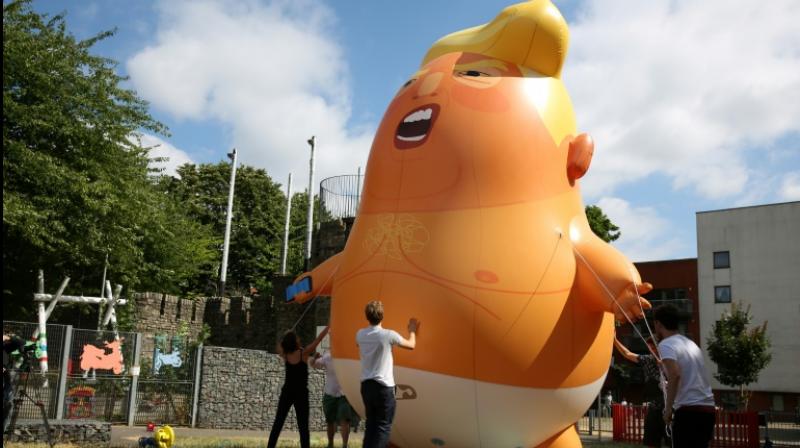 The orange-hued blimp was inflated in Parliament Square at about 9.30 am as a crowd of onlookers cheered. (Photo: AFP)

London: A giant balloon of "Trump Baby" in a diaper has taken flight over Britain's Houses of Parliament as part of the widespread protests against the US President's controversial first official visit to the UK.

The orange-hued blimp was inflated in Parliament Square at about 9.30 am as a crowd of onlookers cheered. As the air filled the six-metre balloon, it rose slowly into the air. It will fly at a height of about 30 metres for two hours.

Blimp organiser Leo Murray said the giant balloon had been designed to speak to Trump "in a language that he understands, which is personal insults."

Though some people might be uncomfortable with the idea of ridiculing the US President, Murray said he feels that Trump's policies have created an atmosphere where "normal diplomatic rules have become very much suspended.

"I feel like once we got to the point where we have a head of state who is suspending due process for some of the world's most vulnerable people and snatching babies from their parents at the border and locking them in cages -- at that point I don't think we need to be civil to this man," he said.

Campaigners raised more than 29,000 pounds to pay for the giant balloon and have said it is intended as a humorous protest to counter the “misery” created by Trump.

“For me this is British political satire at its finest,” said Sheila Menon, an Indian-origin member of the group calling itself the “Trump Babysitters”.

London Mayor Sadiq Khan defended his decision to allow the giant Trump baby inflatable to fly over London, saying: "The idea that we limit the right to protest because it might cause offence to a foreign leader is a slippery slope". “This protest is not anti-American – far from it… having a special relationship means that we expect the highest standards from each other, and it also means speaking out when we think the values we hold dear are under threat,” he said.

The Pakistani-origin mayor has been outspoken in his opposition to Trump's UK visit. He had criticised the US President over his tweets following the terror attacks in London last year.

In an unusual move, the US Embassy here has warned American citizens to keep a "low profile" during President Trump's visit.

Trump, whose policies - including a travel ban on a number of predominantly Muslim countries, the detention of child migrants on the US-Mexico border and the imposition of tariffs on EU steel and aluminium exports - have all been criticised by the UK.

Various other protests have been organised by human rights groups such as Amnesty International and Liberty as well as a “Walk-out Against Trump” drive by Young Socialists.

Busloads of protesters arrived from across the UK to London for the main rally at Trafalgar Square on Friday, according to umbrella group Together Against Trump.

Placards including "Dump Trump" and "Trump not welcome" were among the many banners being handed out to the thousands of protesters.

Scotland Yard is policing the protests with a “ring of steel” around the UK Parliament complex as well as steel fences along some of the route of the procession.

Last night, Trump was booed and jeered as he was helicoptered out of Regent's Park on Marine One to attend a black-tie dinner hosted by Prime Minister Theresa May at Blenheim Palace in Oxfordshire.

Protesters shouted "shame on you", waved anti-Trump placards and banged on pots and pans. A large crowd had gathered outside Winfield House in Regent's Park, the London residence of the US ambassador where the Trumps spent the night, for a noisy protest intended to reverberate over the tall fence.

In an unusual move, the US Embassy in London had warned its citizens protests against Trump's visit this week could turn violent.

US First Lady Melania Trump, who paid a visit to the Royal Hospital Chelsea to meet retired soldiers and local schoolchildren alongside British Prime Minister's husband Philip, must have seen some of the protesters.

Protests are also planned at Chequers, where the bilateral talks take place, and in Scotland, where the American leader will arrive this evening after having tea with Queen Elizabeth II at Windsor Castle.

Trump's schedule has been carefully chalked out to avoid planned protests. Instead of holding his meetings in London, Trump held bilateral talks with Prime Minister Theresa May at her country retreat outside the city and have tea with the Queen at Windsor Castle, on London's western outskirts.

Sarah Elliott, chairwoman of Republicans Overseas UK, told CNN she did not think Trump would be perturbed by the protests.

"I think whenever his detractors go after him, it makes him double down and it actually encourages him to keep going and prove everybody wrong," she said. "So I think that's the effect the balloon will have," she added.