At least two protesters have died and around 6,700 were detained this week in the crackdown, which followed Lukashenko's re-election win 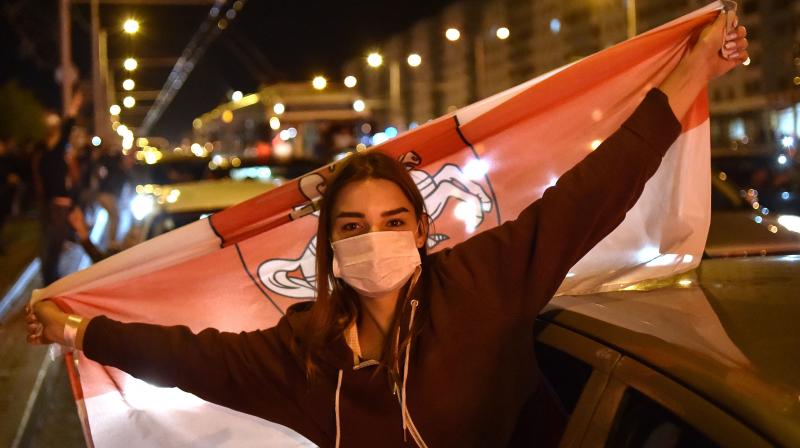 A woman wearing a face mask holds the former white-red-white flag of Belarus during a protest rally against police violence during recent rallies of opposition supporters, who accuse strongman Alexander Lukashenko of falsifying the polls in the presidential election, in Minsk. (AFP)

Their release comes ahead of a meeting of European Union foreign ministers later on Friday which is due to discuss possible new sanctions on the Belarusian leadership after its harsh crackdown on post-election protests.

The detainees’ release and the emollient tone used by two top state officials underscored the vulnerability of Lukashenko’s hold over a country seen by neighbouring Russia as a strategic buffer against NATO and the European Union.

Hundreds of friends and relatives, many of them in tears, stood outside a detention centre in Minsk, the Belarusian capital, in the early hours of Friday morning.

They carried food, water and blankets which they gave to people as they were released.

Some of the freed protesters have had terrible bruises and have described being tightly packed inside cells and other mistreatment.

Deputy Interior Minister Alexander Barsukov denied the prisoners were abused on Thursday night and said all detainees would be freed by the morning.

“They detained everyone, beat everyone, girls, guys, children, who were 15, 14, 13 years old. There was a grandfather who was around 70 with us,” said Sergei, one of the freed detainees, who did not give his surname.

At least two protesters have died and around 6,700 were detained this week in the crackdown, which followed a landslide Lukashenko re-election win which protesters said was false because the ballot had been massively rigged.

A former Soviet collective farm manager, the 65-year-old Lukashenko has faced increasing anger over his handling of the coronavirus pandemic - which he dismissed as a “psychosis” - a sluggish economy and human rights.

A new round of protests began on Friday morning as people formed human chains in Minsk. Local media reported more discontent among workers at some big state-run companies which are the pride of Lukashenko’s Soviet-style economic model.

Lukashenko, alleging a foreign-backed plot to destabilise the country, has dismissed the demonstrators as criminals and unemployed.

But another presidential ally, Natalya Kochanova, the head of the national state council, said on Thursday that Lukashenko had ordered an urgent review into the detentions.

Yuri Karayev, the interior affairs minister, apologised for what he said were injuries sustained by random people at the hands of the police.

Lukashenko has sought better relations with the West amid strained ties with traditional ally Russia.

Moscow, which is urging Lukashenko to accept closer political and economic ties, has expressed concern over what it has depicted as attempts by external forces to destabilise Belarus.

“It’s the same choice [President Bashar al-] Assad had faced in Syria - either you recognise the end is nigh or you go for more violence against your own people,” one EU official said, speaking on condition of anonymity.

“...Should unrest spread around the country, the military would be facing hard choices. If it escalates, at the end of the day no state has the capacity to police the whole country and all its people.”