Queen Elizabeth's final flight is the most tracked in history 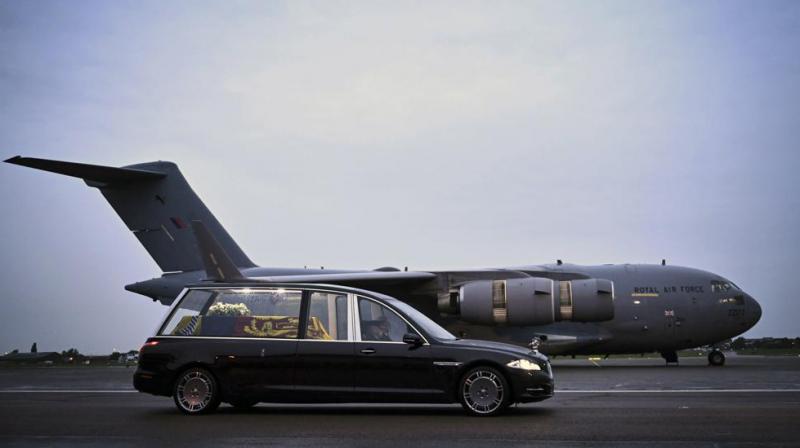 The coffin of Queen Elizabeth II is taken away in the Royal Hearse from the Royal Air Force Northolt airbase, London, Tuesday, Sept. 13, 2022. The queen's coffin is flown back to RAF Northolt, an air force base in London, and driven to Buckingham Palace. (Ben Stansall, Pool Photo via AP)

Just over 5 million people viewed Queen Elizabeth's final flight on Tuesday, as the journey carrying the late monarch's body from Edinburgh to London became the most tracked flight in history.

The company said an unprecedented 6 million people tried to follow the flight within the first minute of the Boeing C17A Globemaster turning on its transponder at Edinburgh's airport, affecting the stability of the platform.

"Seventy years after her first flight as Queen aboard the BOAC Argonaut 'Atalanta,' Queen Elizabeth II's final flight is the most tracked flight in Flightradar24 history," Flightradar24 Director of Communications said in an email.

Flightradar24 said the flight was more than twice the previous record of 2.2 million – when U.S. House Speaker Nancy Pelosi flew on a controversial visit to Taiwan in August.