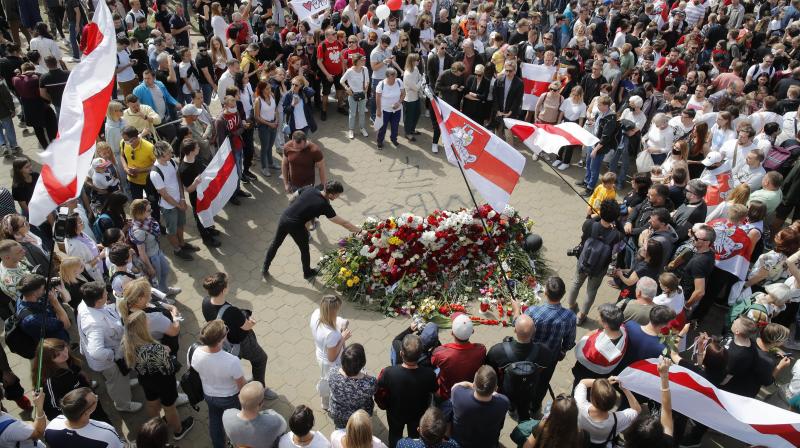 People with old Belarusian National flags lay flowers as they gather at the place where Alexander Taraikovsky died amid the clashes protesting the election results, during his civil funeral in Minsk, Belarus. (AP)

A large crowd had formed near the Pushkinskaya metro station in the capital, an AFP journalist said, in honour of a protester who died there during this week's police crackdown on demonstrators.

Demonstrators laid flowers at the site where Alexander Taraikovsky, 34, died on Monday during clashes between protesters and police a day after the election that Lukashenko claims to have won with 80 percent of the vote.

Many chanted "Leave!" and some held pictures of protesters with severe bruises, after accounts emerged of detained demonstrators being beaten and tortured.

Others carried signs reading "No to Violence" and "No More Torture".

More than 6,700 people were arrested in the crackdown and hundreds injured.

Officials have confirmed two deaths in the unrest, including Taraikovsky who they say died when an explosive device went off in his hand during a protest, and another man who died in custody after being arrested in the southeastern city of Gomel.

Taraikovsky's funeral was being held on Saturday and a "March for Freedom" is planned in central Minsk on Sunday, after main opposition figure Svetlana Tikhanovskaya called for a weekend of new demonstrations.