The European Union states that they will start talks on a post-Brexit transition in January but will not begin trade talks until March. 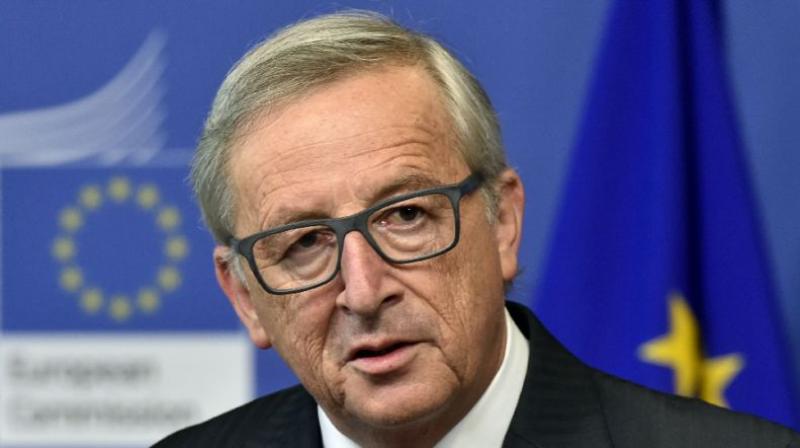 After months of tortuous negotiations, European Commission chief Jean-Claude Juncker struck a deal with May on outline terms of Britain's withdrawal from the EU.(Photo: File)

Brussels: British Prime Minister Theresa May urged European Union (EU) leaders at a summit on Friday to move Brexit talks onto trade as quickly as possible, as they prepared to sign off on an interim deal on the divorce.

Her 27 counterparts are expected to agree on Friday that sufficient progress has been made on key separation issues including the divorce bill and the Irish border to move the negotiations onto the future relationship.

The EU's negotiating guidelines state they will start talks on a post-Brexit transition in January but will not begin trade talks until March, calling for more clarity about Britain's goals.

Addressing the leaders over a night dinner of roasted langoustines, ballotine of capon and "festive log with a twist", May was "clear about wanting to move onto trade talks as quickly as possible", a British official said.

May told them she "makes no secret of wanting to move onto the next phase and to approach it with ambition and creativity", adding that a "particular priority" should be the transition period.

The British premier had earlier sought to brush off a parliamentary defeat over her Brexit strategy, in which members of her Conservative party rebelled to demand a final vote over the terms of the withdrawal.

May said she was "disappointed" at the setback, which critics warned could undermine her authority to deliver a deal, but stressed: "We're on course to deliver Brexit."

Several other EU leaders sought to play down the impact of the vote, although Luxembourg Prime Minister Xavier Bettel warned that the domestic opposition was "not making her life easier".

Dutch Prime Minister Mark Rutte said May still had a "formidable stature" in Brussels, saying that last week's hard-fought agreement on the divorce deal "showed you should not underestimate her".

However, with British ministers only due to discuss the post-Brexit future next week, he warned that "we need from her to understand how she sees the future relationship".

German Chancellor Angela Merkel added that while progress has been made, there were still "outstanding questions".

After months of tortuous negotiations, European Commission chief Jean-Claude Juncker struck a deal with May last week on the outline terms of Britain's withdrawal from the EU in March 2019.

It covers Britain's financial settlement, the future of the Irish border and expatriate rights, while the next stage will cover trade and a transition period to ease the break.

British officials are hoping for a deal by March on a two-year transition, during which the bilateral relationship would largely stay the same, although Britain would have to follow EU laws.

However, the EU has warned May that her hopes of agreeing a bespoke trade deal before Brexit to replace Britain's membership of the EU's single market and customs union is unrealistic.

"I'm looking forward to discussing that deep and special partnership for the future," May said as she arrived for the summit.

If Wednesday's vote pointed to the battles May still faces at home over Brexit, EU President Donald Tusk acknowledged the bloc's own unity would be tested in the months ahead.

"I have no doubt that the real test of our unity will be the second phase of the Brexit talks," Tusk told reporters as he arrived at the summit.

He said a "lack of unity is very visible" on two key subjects facing the EU after Britain leaves: plans for a way forward on the migration crisis, and proposals for reforms of the eurozone.

However, Tusk warned earlier this week of a "furious race against time" to reach the next stage of negotiations.

Questions still linger over the divorce agreement, after British Brexit Minister David Davis appeared to suggest it was not legally enforceable.

There are particular concerns about the guarantee made by London -- at Dublin's request -- that there will be no frontier checks between Ireland and the British province of Northern Ireland Davis's comments prompted a warning by the EU that Britain must not backtrack, and Rutte repeated on Thursday: "We cannot have a misunderstanding of what was agreed."