The residential tower was built in 1974 and had been extensively refurbished in works that were completed last year. 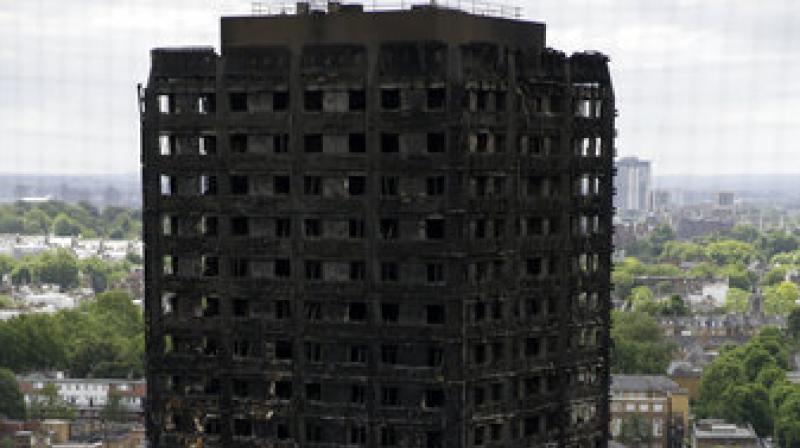 London firefighters combed through the burned-out public housing tower Thursday in a grim search for missing people as police and the prime minister launched investigations into the deadly inferno, with pressure building on officials to explain the disaster and assure that similar buildings around the country are safe. (Photo: AP)

London:  The type of cladding used on the exterior walls of a London tower block that went up in flames this week was not graded fire-resistant and its use is restricted in the United States, British media reported on Friday.

The aluminium cladding, called Reynobond, was made by US company Arconic and had a polyethylene core, which the reports said was slightly cheaper than fire-resistant models by the same manufacturer.

It was fitted by a company called Harley Facades, which has put out a statement following Wednesday's blaze saying "We are not aware of any link between the fire and the exterior cladding of the tower."

The Times newspaper quoted a Reynobond salesman as saying that in the United States the panels were banned for buildings taller than 40 feet (12 metres), far lower than the 24-storey Grenfell Tower that was consumed by the roaring blaze.

The residential tower was built in 1974 and had been extensively refurbished in works that were completed last year. "It's because of the fire and smoke spread. The FR (version) is fire-resistant. The PE is just plastic," the salesman was quoted as saying.

The paper said the fire-resistant Reynobond panels sell for 24 per square metre (about 27 euros, $31) only ?2 more expensive than the version used.

Rydon, the firm responsible for the overall refurbishment of the tower, said its work had "met all required building regulations as well as fire regulations and health and safety standards".

Arnold Turling, a member of the Association of Specialist Fire Protection, told The Daily Telegraph that the panels acted as a "wind tunnel".

"Any burning material falls down the gaps and the fire spreads up very rapidly it acts as its own chimney," he was quoted as saying.

The Daily Telegraph listed several other fire safety concerns about the building, including the lack of a central sprinkler system and missing fire doors.

The paper also said that the last full assessment of fire risks for the building was in December 2015, before the refurbishment was completed last year.

It added that former prime minister Margaret Thatcher had eased building regulations in 1986, and that a review of laws promised after a council house fire that killed six people in 2009 had never been carried out.

Grenfell Tower residents had expressed a series of concerns to the local council, including the lack of sprinklers and the fact that it had a single staircase a common feature of 1970s tower blocks.