More than 70 people are unaccounted for, according to media reports. 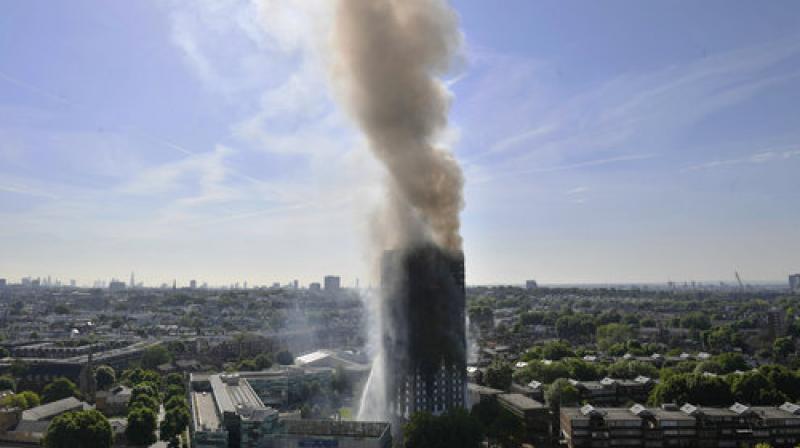 The London Fire Brigade said that 40 fire tenders and 200 firefighters were sent to tackle the flames. (Photo: AP)

London: At least 30 people have been confirmed killed and dozens more are feared dead in the London tower block fire, police said on Friday, as firefighters continued searching for bodies amid outrage over the use of cladding blamed for spreading the flames.

"We know that at least 30 people have died as a result of this fire... I do believe the number will increase," police commander Stuart Cundy told reporters in front of the charred Grenfell Tower.

Cundy said police had started a criminal investigation but there was nothing to suggest "that the fire had been started deliberately".

He also said the last flames had finally been put out, two days after the fire broke out in the night between Tuesday and Wednesday in the 24-storey tower in a working-class enclave of the wealthy London borough of Kensington and Chelsea.

More than 70 people are unaccounted for, according to media reports, although it was not known whether some of those were among the bodies recovered so far.

Police have warned some of the victims may never be identified because of the state of the remains.

Cundy said one of the victims was a person who died in hospital. Twenty-four injured survivors are still being treated, 12 of them in critical care.

Firefighters were using drones and sniffer dogs to search the building, saying that some of the upper floors are still inaccessible to humans because of concerns about the stability of the structure.

- Queen visits survivors -
The area surrounding the council-owned tower has been plastered by desperate relatives with pictures of the missing, from grandparents to young children, and large numbers of volunteers were assisting survivors.

Queen Elizabeth II and her grandson Prince William visited a community centre where some of the survivors are being housed, as anger grows among local residents about allegations that fire safety concerns were ignored for years.

The mayor of London Sadiq Khan is greeted by a mob of angry locals demanding answers from authorities over a deadly fire in a tower block pic.twitter.com/M4vcNNpqah

The government has ordered a judge-led inquiry into Wednesday's disaster, which is under pressure to act quickly.

Javid said inspections of similar buildings had been ordered, with particular attention to the modern cladding used to beautify and add an insulation layer to ageing concrete and steel structures.

"We need to do whatever it takes to make people that live in those properties safe: that's either make the properties safe or find some other accommodation, it has to be done," he said, adding that survivors from the tower would be re-housed in the local area.

Opposition Labour leader Jeremy Corbyn has called for houses in the area to be "requisitioned" for survivors.

- Syrian refugee victim -
Prime Minister Theresa May has come under criticism for not meeting residents when she visited the site on Thursday to talk with emergency workers.

She met with injured survivors in hospital on Friday. Locals yelled questions at mayor Sadiq Khan when he walked through the neighbourhood on Friday.

"How many children died? What are you going to do about it?" a young boy asked Khan, as the mayor tried to stop tensions rising further.

The fire forced residents to flee through black smoke down the single stairwell, jump out of windows or even drop their children to safety.

One of the victims was named as Mohammed Alhajali, a 23-year-old Syrian refugee, who came to Britain in 2014 with his brother.

"Mohammed undertook a dangerous journey to flee war and death in Syria, only to meet it here in the UK, in his own home," the Syrian Solidarity Campaign said in a statement.

Alhajali, who lived on the 14th floor, was a civil engineering student at West London University. "His dream was to be able to go back home one day and rebuild Syria," the campaign group said.

- Cladding restricted in US  -
Questions are growing about how the flames spread so quickly, engulfing the tower's 120 apartments in what fire chiefs said was an unprecedented blaze.

The focus of criticism is on the cladding fitted to external walls of the 1974 tower as part of a ?8.7 million ($11 million, 9.9 million euros) refit completed last year.

According to media reports, the cladding had a plastic core and was similar to that used by high-rise buildings in France, the United Arab Emirates and Australia, which had also suffered fires that spread.

The Times reported that the type of cladding used on the building was banned in US buildings taller than 40 feet (12.2 metres) because of fire safety fears.

It said the company that manufactured the cladding also made fire-resistant models that cost fractionally more than the standard version.

Harley Facades, which fitted the panels, said in a statement: "At this time, we are not aware of any link between the fire and the exterior cladding."

In addition to debate over the cladding, questions have also been raised over why there was no sprinkler system in the Grenfell Tower which could have helped stop the fire spreading, or any central smoke alarm system that would have woken sleeping residents.