Asked if he was concerned that what critics see as Trump's erratic leadership is dangerous or worrying, Macron said no. 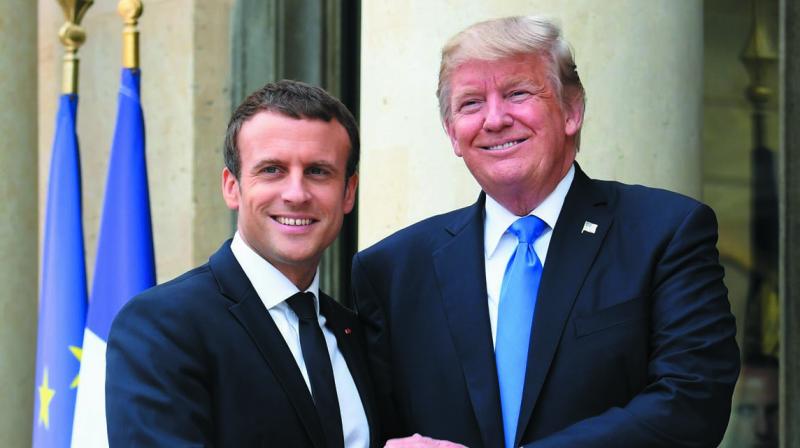 French President Emmanuel Macron shakes hand with his US counterpart Donald Trump as they arrive at the Elysee Palace in Paris. (Photo: AFP)

But Macron's real problems lay at home. And in his first national television interview since his election, the 39-year-old leader struggled to claw back public support for his "economic transformation" of a stagnant France and to shed his image as a president of the rich.

Though he came into the presidency little-prepared to lead a nuclear-armed country, Macron played on his international stature during his appearance on the TF1 network.

He suggested he helped persuade Trump not to "tear up" the international accord curbing Iranian nuclear activities in exchange for resumed trade. Trump stopped short of pulling out of the deal in a speech Friday, but accused Iran of violating it and held open the possibility of a US withdrawal.

"He wants to make things tougher with Iran ... I explained to him that for me that is a bad method," Macron said. "Look at the Korea situation. We broke off all negotiations with Korea. What is the result? A few years later we have a country that is about to have a nuclear weapon."

To drive home his support for the Iranian accord, the French leader pledged to visit Iran soon.

Asked if he was concerned that what critics see as Trump's erratic leadership is dangerous or worrying, Macron said no.

"The US is our ally," Macron said, stressing the importance of military cooperation against Islamic extremists in Syria and beyond.

He defended the idea of multilateralism, instead of each country for itself, but he also insisted that France will not quietly bow to the US or other interests.

Macron also pointed to French accomplishments since his election: the choice of Paris to host the 2024 Olympics and the victory of France's candidate to lead UN cultural agency UNESCO.

The president showed no sympathy for Hollywood producer Harvey Weinstein, who is facing a tsunami of allegations of sexual harassment and abuse.

"I have started the steps to withdraw the Legion of Honor award" bestowed on Weinstein in 2012 for his work on Oscar-winning French film "The Artist," Macron said.

He pledged new measures against sexual harassment, notably in public transport, and speeded-up procedures for investigating and prosecuting such acts to encourage more women to come forward when abused.

"The important thing is to talk. It's not the women who should be ashamed, it's the men," he said.

When it came to what matters most to the French - the economy and their jobs - Macron appeared both combative and defensive. He refused to apologize for blunt language about workers in a struggling factory "screwing everything up" instead of looking for work.

"I wasn't trying to humiliate. ... I take full responsibility for what was said," he said.

He promised 15 billion euros for training programs for workers to "arm yourselves to find a place in this society that's changing." He said it will take a couple of years for his reforms to bear fruit.

Macron sought to convince viewers that his moves to dismantle some of France's vaunted worker protections will ultimately create jobs by giving employers more flexibility to hire and fire instead of scaring investors away.

Macron upended France's political system earlier this year with an unconventional campaign and new centrist party, but his poll numbers tumbled over the summer amid anger over his labour reforms and his clumsy handling of internal politics.