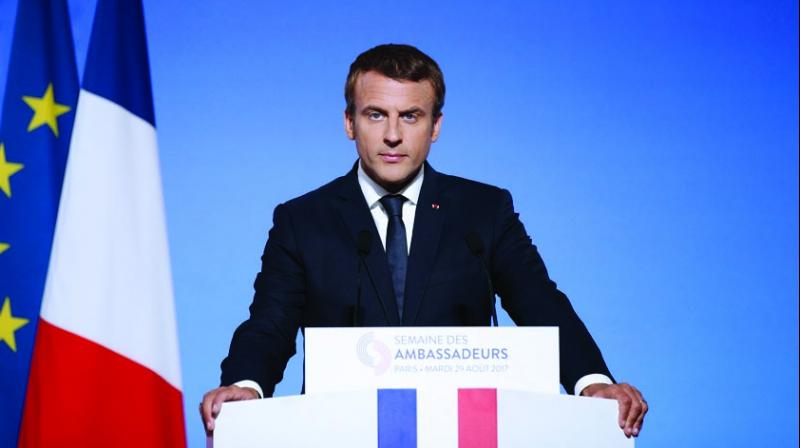 His statement emerged after a Tunisian man stabbed two women to death in Marseille (Photo: File)

Paris: Illegal immigrants who commit crimes in France will face deportation, President Emmanuel Macron said Sunday, in an interview in which he also confirmed disgraced Hollywood movie mogul Harvey Weinstein will be stripped of the prestigious Legion d'Honneur.

In the wide-ranging interview, only the sixth Macron has given at home or abroad since his election in May, he said that even without new legislation "we can take tougher measures" and expel illegal immigrants if they commit a crime, "whatever it may be".

He was speaking after it emerged that a Tunisian man who stabbed two women to death in the southern city of Marseille on October 1 had been arrested two days earlier for shoplifting in eastern Lyon.

Ahmed Hanachi, a 29-year-old whose papers were not in order, had been allowed to walk free the day before he attacked the women.

Hanachi was known to the police for drug as well as alcohol problems and had a history of petty crime, using seven aliases.

"We are not taking all the steps that should be taken. Well, that's going to change," Macron told three journalists who interviewed him for more than an hour at the Elysee Palace.

Macron, 39, whose popularity has plunged from 60 percent in June to 44 percent this month, according to polling by Ifop/Fiducial, was peppered at the start of the interview with questions over a series of comments seen as dismissive of ordinary people or critics.

The centrist president, alternately professorial and combative in the interview, insisted he was taken out of context and did not intend to insult or humiliate anyone by for example calling critics of his ambitious reform agenda "slackers".

He has fast-tracked a major overhaul of France's complex labour reforms, with critics seizing on his use of executive orders as an example of an autocratic leadership style.

In round two, Macron is planning major tax cuts for the wealthy, forcing him to fend off accusations that he is a "president of the rich".

The former investment banker reiterated that the tax reforms are aimed at making the economy more productive and reining in the budget deficit to within the EU-mandated 3.0 percent of GDP, and pointed to changes that would benefit the middle class and the underprivileged such as a lower social charges and residence taxes.

He said he would pursue his agenda "with the same pace and the same determination" and that the French would start to appreciate the full effects of his reforms in 18 to 24 months.

The Weinstein scandal comes as France is stepping up the fight against sexual harassment. "Today, too often, (women) don't press charges because they don't dare to," Macron told the three journalists.

Weinstein -- accused by several women of sexual harassment, groping and rape -- was made a knight of the Legion d'Honneur, France's highest award, in 2012 in recognition of the efforts by Miramax, the company he founded with his  brother Bob, to boost foreign films in the United States.

"I have taken steps to revoke the Legion d'Honneur (Legion of Honour)," Macron said in the interview aired on the TF1 TV channel.

The president also discussed the crisis sparked when US President Donald Trump said Friday that he refused to "certify" the Iran nuclear deal and warned he would "terminate" it unless Congress introduces tough new sanctions against Tehran.

Macron said he would travel to Iran "at the appropriate time".

The French leader spoke to his Iranian counterpart Hassan Rouhani after Trump's virulent speech, telling him that Paris remained committed to the 2015 nuclear agreement which, besides the United States, was also negotiated with Britain, France, China, Russia and Germany.

Trump "wants to get tough with Iran... I told him it was a bad approach in my view."