The motion was tabled by opposition Labour leader Jeremy Corbyn, who wants to force a general election. 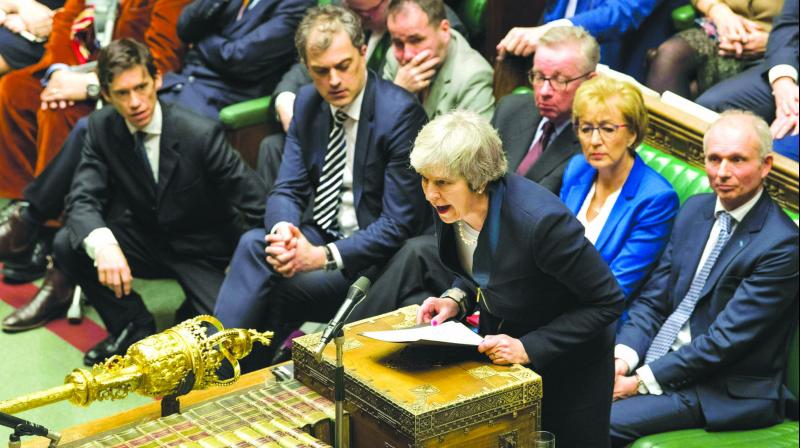 British Prime Minister Theresa May speaks in the House of Commons in London after losing a vote on her Brexit plan on Tuesday. (Photo: AP)

London: Prime Minister Theresa May was expected to win a confidence vote on Wednesday despite a crushing defeat over her Brexit deal that triggered warnings of a chaotic “no-deal” divorce.

MPs on Tuesday rejected May’s deal on leaving the European Union, leaving the Brexit process in limbo with just 73 days to go before the official departure date.

May suffered the biggest government defeat in modern British history when the House of Commons rejected by 432 votes to 202 the deal she struck with Brussels last year after 18 months of negotiation.

The EU immediately warned that the vote raises the risk of a hugely disruptive “no deal” Brexit where Britain could sever ties with its biggest trading partner overnight.

German Chancellor Merkel offered May some hope, saying “we still have time to negotiate but we’re now waiting on what the prime minister proposes.”Ireland, the only EU member state with a land border with Britain, said it would now intensify preparations for a “disorderly Brexit”, with foreign minister Simon Coveney calling on colleagues to “hold their nerve”.

May struck a conciliatory tone after the vote, promising cross-party talks to try and salvage a workable Brexit deal before returning with a new plan next on Monday.

The prime minister’s own backbenchers rebelled in huge numbers over the divorce deal, but the ringleaders said they would still back her in the confidence vote scheduled for around 1900 GMT.

The motion was tabled by opposition Labour leader Jeremy Corbyn, who wants to force a general election.

May’s parliamentary allies in Northern Ireland’s Democratic Unionist Party have led charge against her Brexit deal, but do not want a Labour government.

Ahead of the 2016 Brexit referendum, most lawmakers – including May – opposed Brexit, which has caused bitter divisions across the nation.

Nearly three years later, they are still to form a majority consensus around any plan, with MPs criticising May’s deal both for keeping Britain too closely tied to EU, and for not keeping it closer.