Getting used to my new identity: Jerome Hamon, ‘the man with three faces’ 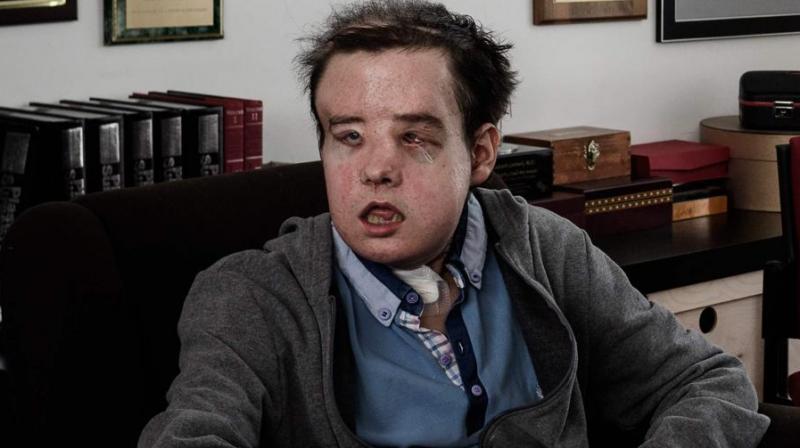 “I feel very well in myself,” the 43-year-old transplant recipient told reporters last week as he continues his recovery from the surgery which was carried out on January 15 and 16. (Photo: AFP)

Paris: Jerome Hamon is getting used to his new soubriquet “the man with three faces”.

He remains in a Paris hospital, three months after undergoing his second face transplant, but has quickly accepted his new “identity”.

His new face remains smooth and motionless, with his skull, skin and features yet to be fully aligned, a gradual process reliant on immunosuppressant drugs which, hopefully, will prevent his body rejecting the transplanted material.

“I feel very well in myself,” the 43-year-old transplant recipient told reporters last week as he continues his recovery from the surgery which was carried out on January 15 and 16.

“I can’t wait to get rid of all this,” he adds, speaking with a difficulty of all the major treatment he has undergone to become the first man to have received two face transplants.

This unprecedented feat was painstakingly carried out by the staff at the Georges-Pompidou European Hospital in Paris, and Laurent Lantieri, a professor of plastic surgery, who led the team through the multi-step procedure.

It was a strange reunion for patient and doctor as it was Lantieri who carried out the world’s first full face transplant, including tear ducts and eyelids, on Hamon at a hospital outside Paris in July 2010.

Two months without a face

His first face transplant in 2010 was a success. But that same year -- in order to treat nothing more than a common cold -- he was given an antibiotic incompatible with his immunosuppressive treatment.

In 2016 he began to display signs of transplant rejection, and his new face deteriorated.

Last summer Hamon was hospitalised and in November his face, suffering from necrosis, had to be removed.

He remained in hospital without a face for two months, a very difficult time, while a compatible donor was sought. 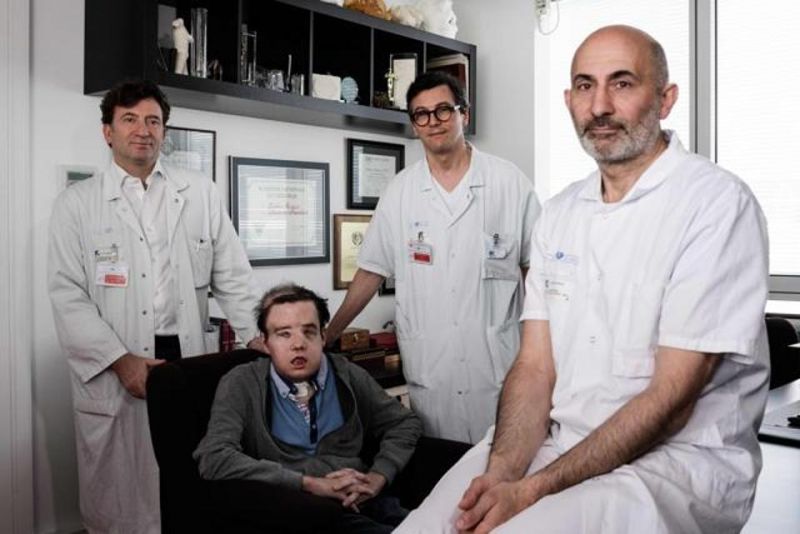 French medicine professor Laurent Lantieri (right), a specialist in hand and face transplant, poses with members of his team and his patient Jerome Hamon on April 13, 2018 at the Hopital Europeen Georges-Pompidou in Paris. (Photo: AFP)

Everyone at the hospital “was blown away by Jerome’s courage, his will, his strength of character in a tragic situation. While he was waiting he never complained, he was even in a good mood,” recalled Bernard Cholley, an anaesthetist.

Eventually, a face donor was found, a 22-year-old man who had died hundreds of kilometres from Paris. Lantieri heard the news on a Sunday in January and the massive logistical and medical operation was swiftly launched.

The donor face was transported as quickly as possible by road on the Monday to the Georges-Pompidou hospital in Paris.

By late morning the following day, Hamon was being wheeled back to his hospital bed following the ground-breaking surgery, with his medical team noticing encouraging signs of good colour in his new face.

The operation answers a key question for Lantieri and the rest of the medical world; “Can we redo a facial transplant? Yes, we can re-transplant and this is what you get!”

To avoid any rejection, the patient underwent three months of special blood treatment prior to the transplant, nephrologist Eric Thervet explained.

Despite all the anxiety and suffering, Hamon is a happy man again. 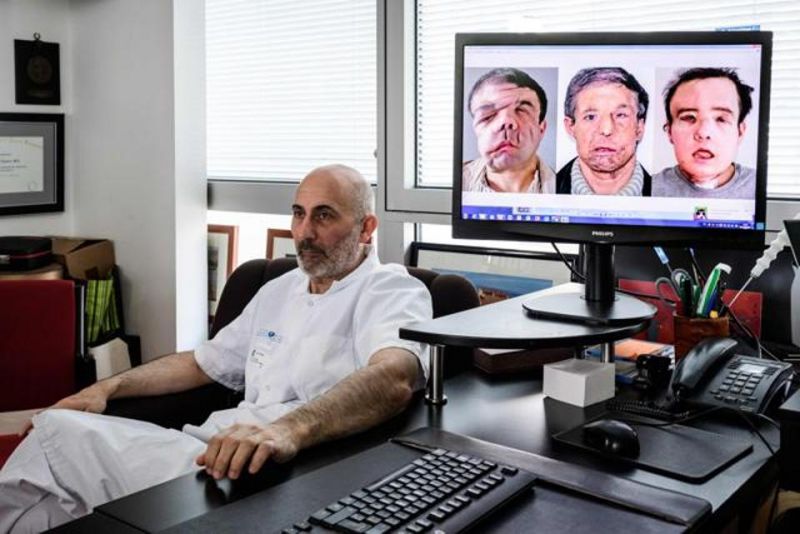 Laurent Lantieri poses next to a screen showing different steps of his patient Jerome Hamon's surgery on April 13, 2018. (Photo: AFP)

“The first transplant I accepted immediately. I thought ‘this is my new face’ and this time it’s the same,” he explained.

“If I hadn’t accepted this new face it would have been terrible. It’s a question of identity... But here we are, it’s good, it’s me.”

There have now been around 40 face transplants throughout the world since the first was performed on Frenchwoman Isabelle Dinoire in northern France in 2005.