UK, EU negotiators to ‘get down to work’ on Brexit terms 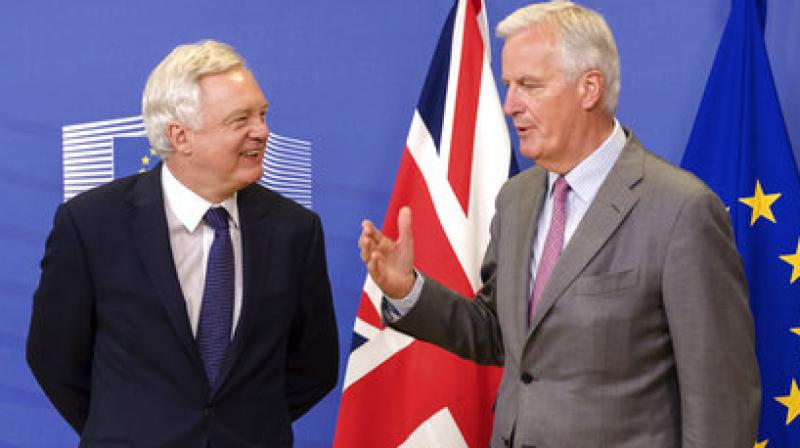 Brussels: The British and EU Brexit negotiators met on Monday, pledging to "get down to work" in a first full round of talks on Britain's divorce terms from the European Union.

"We made a good start last month but we are now getting into the substance of the matter," British Brexit Secretary David Davis told reporters as he was welcomed at the European Commission in Brussels by the EU negotiator Michel Barnier.

"For us, it's incredibly important we now make good progress," added Davis, who held a first day of talks a month ago to agree an agenda, a year after Britons vote to leave the EU. "Now it's time to get down to work and to make this a successful negotiation," he added.

Read: UK: Second round of Brexit negotiations to take place in Brussels

Barnier said: "We will now delve into the heart of the matter. We need to examine and compare our respective positions in order to make good progress."

Both men declined further comment, with Barnier saying they would brief the media on Thursday after their teams have spent four days tackling a range of priority issues.

Earlier last week, British Prime Minister Theresa May's government published a draft law to formally end Britain's membership of the EU, but opposition parties and the leaders of Scotland and Wales threatened to block what they called a "naked power-grab".

The new bill would repeal the 1972 European Communities Act, convert an estimated 12,000 existing European regulations into British law and end the supremacy of EU legislation. "This bill means that we will be able to exit the European Union with maximum certainty, continuity and control," Davis said.

But ministers are braced for a battle over provisions that give them new powers to amend the EU laws as they are transferred without full parliamentary scrutiny.

On June 23 last year, 52 percent of Britons voted in favour of the exit from European Union, ending four decades of membership of the continental fold.